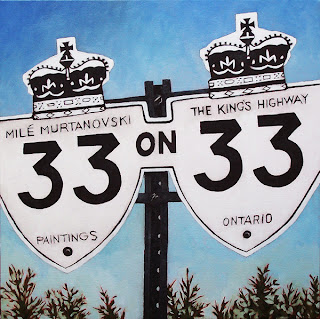 In just a few weeks, at the break of dawn on 25 May, I'll be hitting the road –specifically Prince Edward County's Highway 33 (AKA The King's Highway, AKA Loyalist Parkway)– for my big summer art project.

Beginning at the Murray Canal at the north west end of PEC near Trenton, I'll head out early each day, gradually making my way east along 33, creating one 20" x 20" oil painting each day for 33 days.

Throughout all of this I'll be making regular updates on Facebook, Twitter, and here on this blog. It's very likely that there will be many surprises...and maybe even a guest star or two!

I have no idea what I'm going to paint other than there will obviously be a strong landscape element in this series. I'll be loosely plotting out my stops next week, but each point may change on the day I eventually go out, and if it's raining I'll paint in my van.
I'm particularly excited about this because, being a "studio painter" it's going to be a challenge for me to paint en plein air (literally "in the open air") without any great plan beforehand, spontaneity being the key to this project, but not my strong suit, artistically. 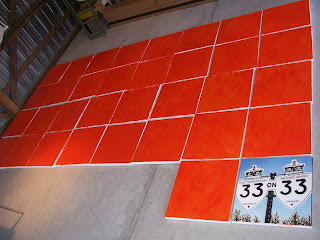 I've just prepped 33 canvases with an orange acrylic ground...and I don't care if that's against plein air painting rules. The show opening is so close the last day of my marathon-of-sorts that I've also pre-wired them to be ready to hang...still wet, if need be!