To the Sound of Trumpets

"It is forbidden to kill, therefore all murderers are punished unless they kill in large numbers and to the sound of trumpets."
– Voltaire 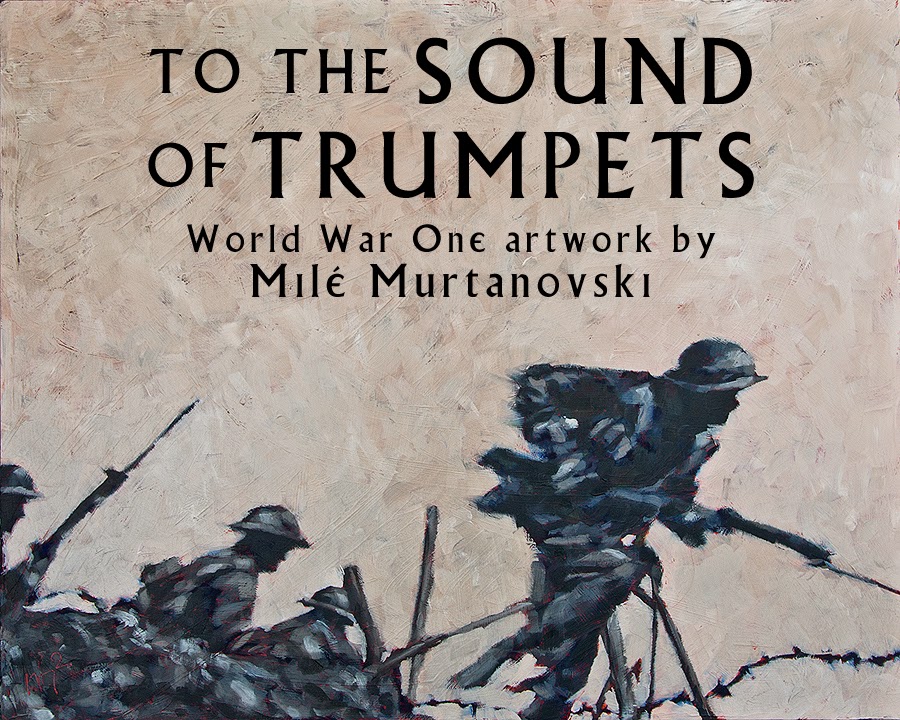 
Here is the MASTER LIST and links to all 100 paintings.

Here is a SHORT VIDEO of all 100 paintings.


To the Sound of Trumpets

One hundred paintings commemorate start of World War One

For his upcoming art exhibition, To the Sound of Trumpets, Milé Murtanovski is creating one hundred paintings to commemorate the hundred-year anniversary of the start of World War One.

Opening on Remembrance Day, Murtanovski has been developing this project for more than a year, immersing himself in research, with a particular focus on the effects of the war on the people of Prince Edward County, his home for the last five years. During the course of his research, Murtanovski was struck time and again by the contrasts between the commonly held idea of valour and the brutal reality the soldiers faced. “I was drawn to investigate what the war was really like, particularly for the men in the trenches,” he says. “I wanted to be truthful and unsentimental about the war without being disparaging. I’d like the viewer to get an idea of the true conditions experienced by these men and have them be seen not simply as names on a cenotaph, but as young boys whose lives were cut short or changed forever. Even in 100 paintings I can’t come close to conveying the magnitude of this horrific war.”

The exhibition, opening at the historic Macaulay Church on November 11, 2014, is presented in partnership with the Museums of Prince Edward County. The exhibit is grouped into five sections. Dance Partners is a series of oil paintings featuring men’s and women’s footwear of the time; all of the men’s are army boots. The second and largest part of the series, Calamity, consists of artwork (mostly oil paintings) reflecting the brutality of the war itself. The third section, The War at Home, looks at what was happening in Canada and Prince Edward County during the war years – half-empty classrooms, the Quakers as conscientious objectors, and women bearing the brunt of the workload on farms and in the factories. The Devil’s Harvest is a series of ink portraits of fallen soldiers from Prince Edward County, and the final section, Remembrance, reflects upon the true cost of the war.

Murtanovski is no stranger to painting projects of epic proportions. In 2013 he painted 101 paintings in 101 consecutive hours. Entitled County 101, this series portrayed the people, places and things that make Prince Edward County so special. In 2012 he undertook another painting marathon, Burning the Midnight Oil, wherein he painted 100 portraits in 100 consecutive hours.

For this project, Murtanovski will do mini-residencies at five Prince Edward County museums, creating one painting at each site. The public are encouraged to come out and meet the artist and watch his progress:

The twenty-four portraits of Prince Edward County soldiers who died in the war will be painted in one of Murtanovski’s signature painting marathons. Between October 18th and 19th, he will paint one portrait an hour for 24 consecutive hours; viewers can watch him paint live online via Ustream.

Milé Murtanovski has been painting for more than 25 years and works mainly in watercolours, oils, and inks. In 2010 he founded Small Pond Arts (www.smallpondarts.ca) with his wife, artist Krista Dalby. Small Pond Arts is an artist residency centre, art gallery, and host to numerous creative community events throughout the year.

Exhibit details:
November 11-30. Daily 12-4, admission is free. Reception November 11. Artist talk November 22, 2 PM. Church at Macaulay Heritage Park, 35 Church Street (at Union Street), Picton.
A portion of all sales will be donated to the Museums of Prince Edward County and the Picton Legion.