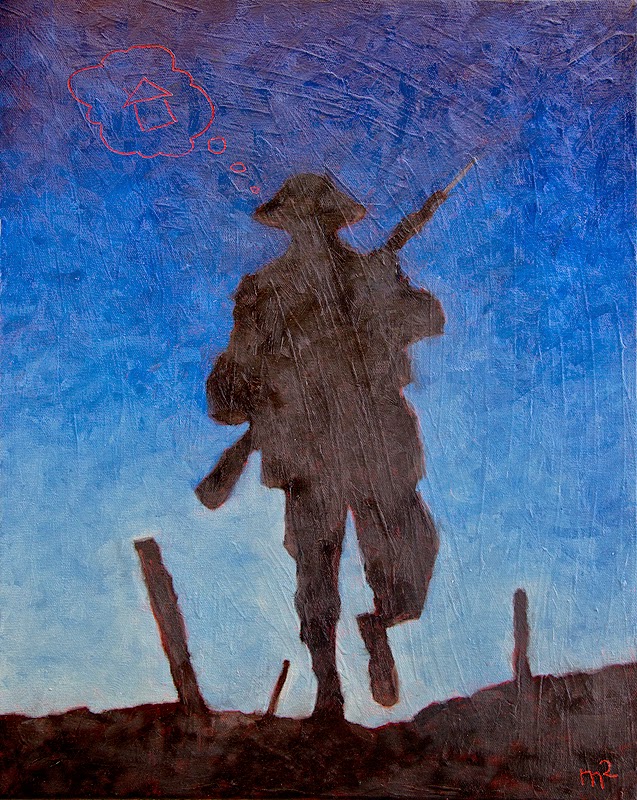 The average age of the Canadian soldier in World War One was 26 years. Now imagine leaving your home in the city or country, crossing the Atlantic, and being thrust into a conflict you can't fully understand. Before 1917 when Canada enforced conscription, everyone went (more or less*) willingly, but nobody any any concept of the scale this war would eventually reach in violence, horror, duration, casualties, boredom, technical challenges, and on and on and on.

Apart from research of firsthand accounts, my inspiration while painting these two came from "Home" by Roger Waters (the single soldier painting borrows it's title from a line in that song) and "The Day After Tomorrow" by Tom Waits. Look them up.

In the Calamity section of my WWI painting project, these are the last two (or first two, depending on your perspective) of a group of three paintings that includes The Theatre of War.

*Of course, propaganda and peer pressure played a large role in convincing/shaming young men into going; you were heading for a grand adventure! it'll be over by Christmas! are you a real man or not? your chums are fighting, why aren't you?**

**This last one is an actual tagline from a propaganda poster