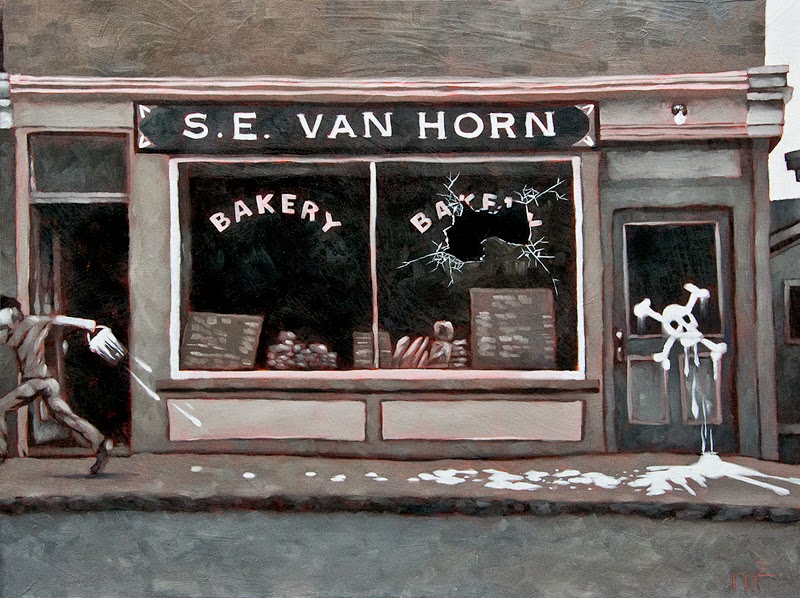 Back in the deep freeze towards the end of last winter, I was at the archives in Wellington, poring through microfilm of the Picton Gazette from 1914 and 1915, looking for letters from the front, or old ads, or anything else that could give me ideas for paintings for my War at Home section of my WWI painting project. By sheer happenstance I saw these two letters to the editor out of the corner of my eye:


Letters to the Editor, Picton Gazette,
14 September 1914
Mr. Editor: it appears that evil-minded persons have circulated reports to the effect that, being in sympathy with the Germans in the European war, that it was unsafe for the public to use bread and provisions sold by me for fear of it being poisoned.
I am surely at a loss to know what the objects of such statements could be.
I can scarcely imagine that persons in the same business would be unscrupulous enough to fabricate such vile slander to build up their business on the ruins of mine.
As a British subject I intend to invoke the protection of the law, and if evidence of such slander be secured, will bring the guilty offenders into court for prosecution and conviction.
S. E. Van Horn

To whom it may concern: This is to certify that I have made investigations regarding reports that have been circulated to the effect that the bread sold by Mr. S. E. VanHorn has been poisoned, he being a German. I have found these reports to be entirely false and without foundation. Mr. VanHorn is not a German, nor of German descent. He is of Dutch descent, born in the United States, but is now a citizen of Canada, having some time ago taken out all necessary papers. I have no hesitation in stating that the patrons of Mr. VanHorn should have no fear whatever from such defects in purchasing his bread.
C. A. Publow, M.D., Medical Officer of Health


I printed out the page these were on, but struggled for a few months with how to best illustrate insidious rumour; I chose to go with the vandalism angle and, while the skull and crossbones implies poison, a subtler implication is the shape of the hole in the broken glass. The date of these letters makes them extra troubling since the propaganda machine wouldn't have been in place yet.