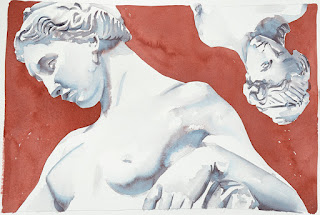 I've been collecting images of statues for many years now, and I'm finally using more of them in my paintings. There's just something about these ancient sculptures that I find fascinating; aesthetically, it's the smoothness of the materials (whether it's white stone or black marble or green, oxidized bronze) and the stunning accuracy of the figures and drapery.

But there's something more...something about their permanence, their mythological connection, their idealized perfection...and their scale, too, often being much larger than life.

I could paint these forever and still feel I haven't captured the amazingness of them; you'll just have to go to Italy and see these statues yourself.

I had initially prepped these over a year ago with the intent to paint them using wine (like my experiments with Baco Noir about five years ago) for a solo show at Closson Chase winery last year (for which I showed the first ten paintings of my Tournament of Shadows series instead). However, the first painting (a statue of the god Vulcan) wasn't working out to my satisfaction, so I decided to scrap the whole painting in wine gimmick (it's highly unlikely I'll ever return to that medium) and put the Statuarial project on indefinite hold.

I did use a few of the images when I was invited to join the Blizzmax On A Roll group show later that year, but rendered the statues in pencil. It was very fun, but it only served to remind me that this was also not to my total satisfaction; I liked the pencil work, but still felt these images would be better done in watercolours or maybe even oils.

A few months ago, while working on a couple of illustration assignments rendered in watercolour, I started feeling a strong urge to return to that medium for my own work, and, of course, I remembered these six paintings-in-waiting (seven, if you include Vulcan, but, what with all that useless wine all over him, that painting was unsalvageable).

I thought briefly about including more colour, but decided to keep a very limited palette for the figures (using only Indian Red and Indigo) and a strong, warm colour for the backgrounds (Indian Red).


These are the results. 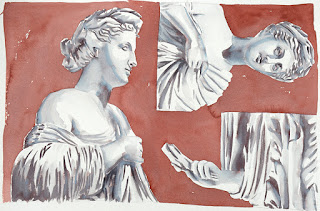