November 02, 2009
This year, a friend of ours invited us to a Halloween party with a Can-con (Canadian content) theme and Krista almost immediately decided to (not dress up as, but) replicate the Finnegan puppet from CBC’s long-running and beloved kid’s show, Mr. Dressup as designed by puppeteer Judith Lawrence. I thought that was a great idea and, after seeing her make one excellent puppet after another, I knew she’d do a great job (and she did). I mentally entertained the notion of building the Casey puppet from the same show for about ten seconds before dismissing the idea on the grounds that I had never sculpted a puppet before and there didn’t seem to be enough time for me to fumble my way through something new. After a few days Krista suggested I make Casey. Since I still hadn’t thought of a good Can-con person or thing to go as, and trusting that she’d guide me through it (and make the costume!), I decided to go for it.

What follows isn't so much a tutorial as it is a document of My First Puppet.

Clay in the bowl on the right, reference photo of Mr. Dressup, Casey, and Finnegan in the middle, and wire and pliers on the left for making the armature of Casey’s hands. The clay had been sitting in water, re-hydrating after being in storage. Even if clay dries out completely (but not if you fire it in a kiln), it can be re-hydrated and reused over and over again. 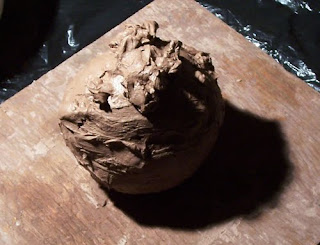 fig. 2. Balls-of-clay are easy to sculpt.

Much of my backup clay (not pictured) was too wet to work with effectively, so I left this ball to dry out a bit until the next day so it could become more workable and not so mucky. 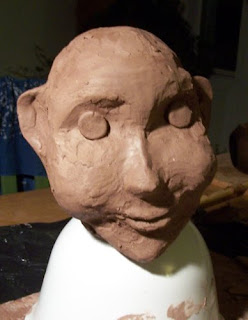 My first attempt at sculpting since high school resulted in Weird Proportions, but I was on the right track so I left it like this at the end of that session, knowing I’d have to resume sculpting and fix the problems another day. 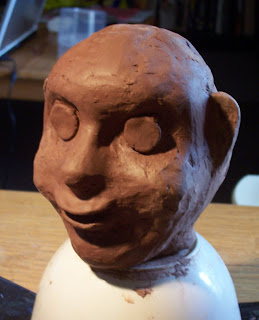 Not working on this for a few days gave me the objectivity to figure out how I could fix the proportion problems. Having additional photo reference showing Casey in profile was a major help, too. I used my fingers and sculpting tools for this phase. 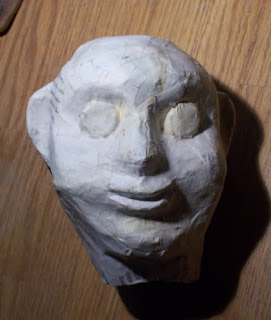 fig. 5. The Ghost of Casey Future.

I had no time to paper maché over the finished clay sculpture, so Krista took over this phase (which I did not witness or photograph, unfortunately). She laid down three layers of paper over the clay and then, once the paper was dry, cut a vertical slit from behind each ear down to the bottom of the neck and then carefully peeled the paper off of the clay. The seams were stapled and/or taped up and then sealed with another layer of paper maché. 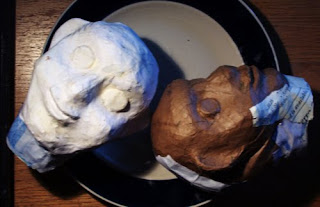 fig. 6. Two heads are better than one.

Krista wanted to make the most of the mold, so she made another head –most likely for nefarious purposes. White (copy) paper or brown (paper bag) paper is better for lasting paper maché puppets than using newsprint. The second replicant is brown simply because that’s what was handy in our recycling bin at the time.

Once the head dried, I painted it with a clear gesso that dries to a matte finish. This process can be repeated as many times as desired, sanding with fine sandpaper between applications, to get as smooth a surface on the puppet as possible, but I didn’t have that kind of time, so, even after some sanding and using an x-acto knife to cut some excess bumps and sharp bits left of paper or tape, Casey is still a little rough. 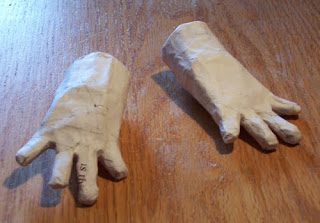 Since my time for this project was very limited and I had more urgent projects to tend to, Krista helped me out a great deal with Casey, beginning with making his hands (and then covering the clay sculpture with paper maché). She made a cardboard tube for his wrists (based on rough measurements of my fingers) to which she attached the wire skeleton of his hands. Over the wire, she built up the form with masking tape and then covered that with paper maché.