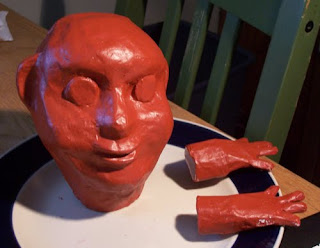 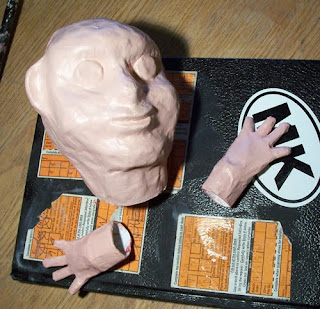 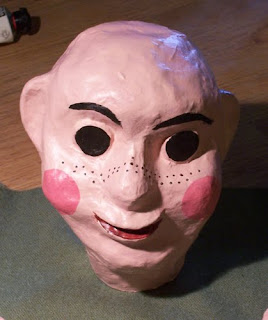 
I used the opposite end of the brush to make the tiny dots of Casey’s freckles since I didn't have a fine-tipped brush at the time of painting. In fact there are some unfortunate smudges made by the not-so-fine brush I had to use for the fine detail work (my better brushes were at my studio in Scarborough). Next time I'll be better prepared. 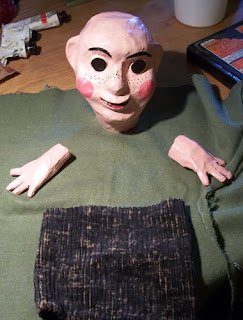 fig. 11. Finished head and hands on fabric for shirt and pants costume.


Painting the face was the end of the line for me as I currently don’t have the skills or experience to make a costume for a puppet and attach it to the head and hands, so Krista took over from here using the fabrics above. I love that he will have corduroy pants. 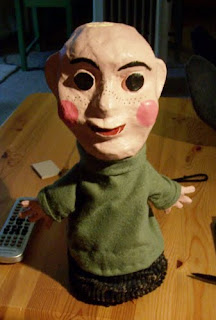 Krista here, happy to be guest blogging! First I drilled holes around the bottom of Casey's neck, and around his wrists. The sewing of the costume was basically just a series of tubes: a tube for his shirt which I sewed to his neck, a tube for his pants which I sewed to the bottom of his shirt, then a tube attached to each hand. I cut arm holes into the shirt and sewed them on from the inside. Finally I created a turtle neck and cuffs; these hid all the stitching quite nicely. 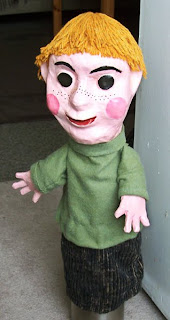 
The yarn Krista found for his hair was thinner than the original puppet’s and had a bit of green running through it but, once she was done, the effect was amazing. Using rubber cement she first glued some yarn to the head and then made a “wig” and attached that overtop. 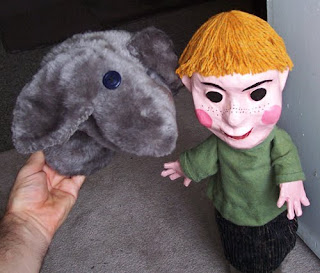 fig. 14. Finished Casey Replicant meets Krista’s Finnegan Replicant.
Krista had finished her Finnegan about a week before our Casey was finally “born.” I think they look great together; for a few days it looked like we had raided the CBC vault and had puppet contraband in our home. Yet one key component was still missing... 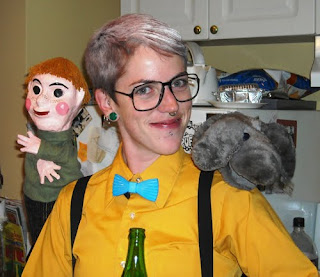 fig. 15a. Finished Replicants with sandra as Mr. Dressup at the party.

I still find this mind-blowing: our friend who invited us to her (and her two housmates') Can-con Halloween Party dressed up as Mr. Dressup. We kept our puppet-making a secret so she had no way of knowing what we were bringing, and on top of that, she only came up with the idea one day before the party. 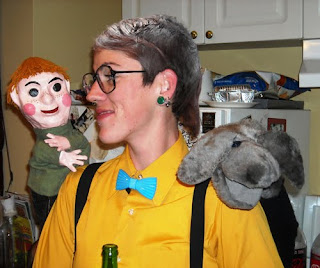 fig. 15b. Finished Replicants with sandra as Mr. Dressup at the party.


I arrived at the party a little bit before Krista and when I saw sandra I knew immediately who she was dressed as. Krista was bringing the puppets with her, so I still had to keep the Secret of the Replicants, but of all the people there, sandra deserved to know what was in store, so I told her. 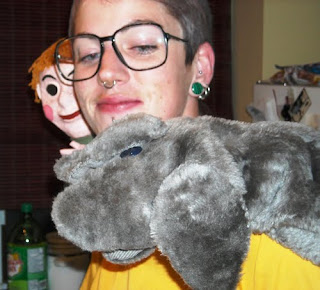 fig. 15c. Finished Replicants with sandra as Mr. Dressup at the party.


The puppets were a smash hit since everybody recognized them immediately and the three of us looked great together. The only things missing were the treehouse and the famed Tickle Trunk. Casey and Finnegan got passed around, photographed, almost corrupted by alocohol, and generally enjoyed by all. 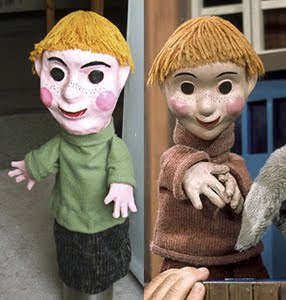 
My puppet could be a little cuter, a little smoother, the chin a little pointier, the skin colour could be a little warmer, and the bridge of the nose a little less pronounced, but overall, he's a pretty good replica, considering this is My First Puppet Ever.

My greatest thanks to Krista for helping me with this, to Judith Lawrence for making and operating the original Casey and Finnegan, and to Ernie Coombs for being Mr. Dressup and entertaining so many children and firing up our imaginations for decades.

Go back and read PART ONE.