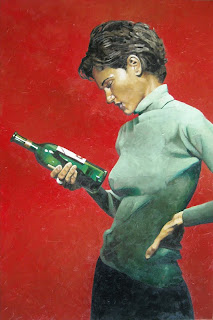 Here's the last iteration of what's now become the "Fuel Saga". I originally painted this in watercolours (from my own photo reference) as Fuel back in 1998. Then, in 2007, I was doing large abstract oil versions of my existing watercolours and Fuel became Having the Last Laugh. Then in 2009 I revisted my photo ref and did an oil version of it as Fuel 2, which sold during the Big Splash grand opening party of our Small Pond Arts. 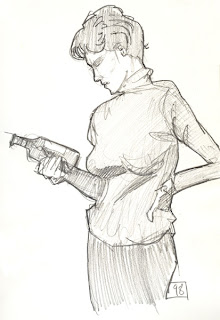 Sketch based on my photo ref.

Now, I deliberately left the background of the watercolour Fuel blank white for the contrast, but the oil version got a deep red background because I liked the way red complimented and vibrated against the same model's green sweater in mad. I painted Fuel 2 the same time I painted another oil translation of an earlier watercolour, Unravel Me 2, and gave them both the very same deep red background.

I submitted Fuel 2 as a sample piece in my application to the Artevino show and it was in all of their promotional materials and it started getting a lot of attention, so when the painting sold, I felt I needed to still include it in the show somehow, so I repainted it using the same original 12-year-old reference photo. Viewed side by side, you can clearly see the differences (they were painted more than a year apart, too): 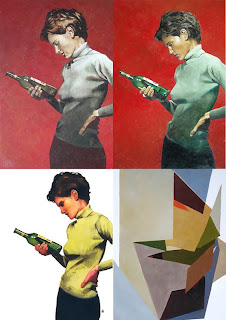 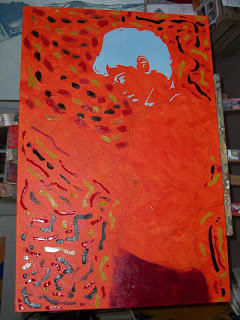 Fuel 3 at an early stage

The orange is the acrylic underpainting over top the pencil lines. The light blue (oil) is an error in judgement and I shouldn't have put a light colour where a dark colour will eventually go (not a rule, per sé, but it looks better the other way 'round). The purple at the bottom is also acrylic and also an error (but this time, more of a moot point since it would become dark on dark with no real advantage of the purple). The squiggles in oil are yellow ochre, olive green, and cadmium red dark, and were squeezed out of the tubes like that so I could blend them directly on the canvas. The background became more intense, but not as interesting, as Fuel 2.