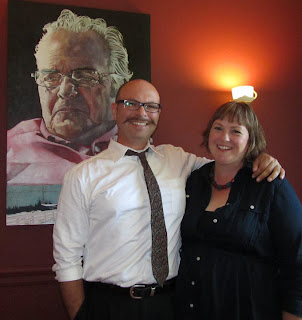 Me and Krista in front of George Emlaw's portrait.
(this photo by Pat Hyduk (the rest are by Krista).
More of Pat's photos from the reception can be found on Facebook HERE) 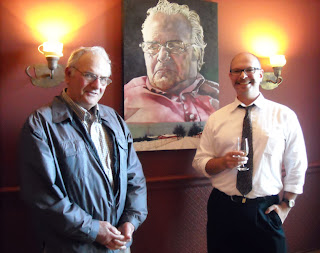 I heard he was so pleased with his portrait that he hovered near it the whole time he was there, almost...protectively? Everyone was saying how significant the addition of his farm at the bottom is; the farm is going by the wayside, and George is kind of sad about that. There's still another month or so until we hear if this painting gets in the Kingston Prize for Canadian Portraiture exhibition. 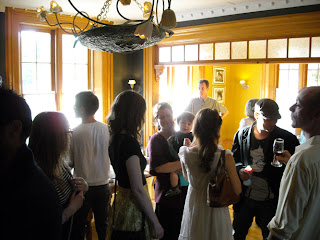 
The turnout Thursday evening was simply amazing. The restaurant estimated about a hundred people turned up for the event, making this my largest art opening. But numbers aren't everything; being surrounded by many of our friends made it my happiest art opening, and I give immense thanks to everyone who came out last week.

Extra big thanks to Alex, Melanie, Monika, and the rest of Angéline's staff for hosting; Chef Michael Potters and his team for the great food; the seven (7!) wineries for their tasty tastings; Tammy Love for literal Field to Canvas artwork in the front bar area; and, of course, my lovely wife, Krista, who supported this endeavour by putting up with many late nights of painting, painting, painting. 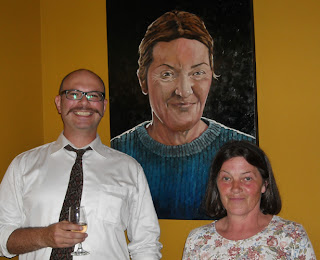 Here I am with Erika Mohssen-Beyk, who seemed quite amazed that her portrait was so much larger than life. 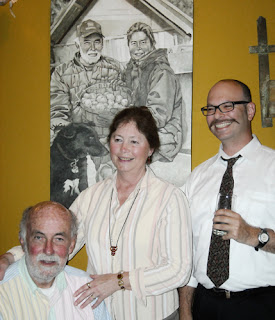 Here's Ed and Sandi Taylor, stripped of their winter clothes. Sandi reminded me the name of the dog in the painting is Socks (I had forgotten his name since the photo shoot, but I've  since edited the blog post to fix this omission). 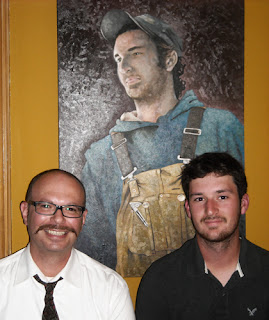 Me and Cody Vader. We look comfortable, but we're actually squatting so as to fit into this composition. 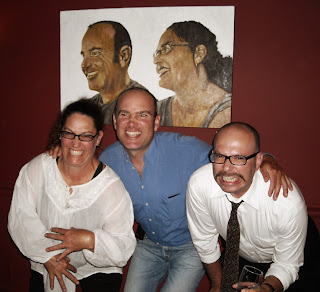 Partly making fun of the need to squat in the previous pic, and partly bored of "straight" posing for the paparazzi, Vicki, Tim, and I ham it up a bit. 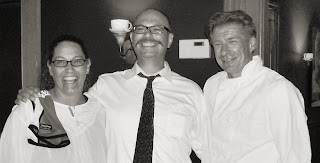 Chef Potters came out of the kitchen briefly to say a few kind words about my paintings and the farmers in them. His team served up some delicious hors d'oeuvres all night long. Vicki, Michael, and I didn't plan it, but here we are all in co-ordinating white tops. 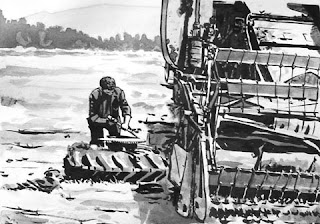 To fill out the space in the front entrance of the inn portion of Angéline's, Alex asked me to bring some other, thematically-related paintings. As well as a few cow paintings in ink, I brought these two pictures, and their inclusion makes me very proud, since, not only does this show celebrate local farming in Prince Edward County (some of it going back many generations), but it now includes my own family's farming heritage in Macedonia which also goes back several generations.

The painting above is based on a family photo of my father fixing a wheel on their combine harvester in Macedonia, probably in the 1960s (certainly before he emigrated to Canada in 1969). It's a fine illustration of my dad's formidable skills as a mechanic and, interestingly, is incredibly reminiscent of my very first blog post. 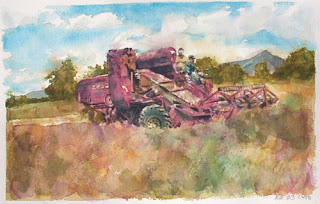 
This painting (of the same combine as in the ink painting) is based on another family photo, but this time one taken about 40 years later when my father and his brother (pictured, shirtless on the machine) visited Macedonia in 2002. I was trying for a very loose technique with this one, to the point where the combine looks almost abstract. I really like the sky in this one.