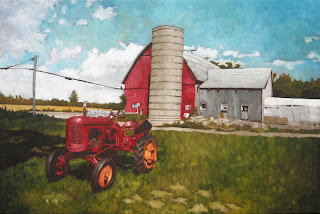 Tonight is the opening of Art in the County, but I have to miss out on the festivities as I'm also a projectionist at The Regent Theatre, and I'm showing the latest Broadway production of Oscar Wilde's "The Importance of Being Earnest."

This is my entry for this year's AitC based on a photo I took last summer driving around the county looking for beautiful scenes to paint (needless to say, there were plenty...and still more left unphotographed). This is the first thing I shot at Karlo Estates while visiting Richard Karlo and Sherry Martin. They're great folks and Richard makes the best (and PEC's only) port I've ever had. I seriously can't shut up about the stuff. Sherry's an accomplished artist herself and runs a life drawing class on Wednesday nights during the warmer months (they're held in a loft space in the barn depicted above, which isn't winterized). Unfortunately, summer is when we're very busy at Small Pond, and I rarely can get away, but this year I'm going to make a concerted effort to go more often (because I love figure drawing).

I wanted to make the sky especially beautiful, so I studied one of my books on John Singer Sargent, hoping to learn something through mere observation and then actually infuse the sky with some Singer-inspired flavour. I really do like how this sky turned out (I moved some clouds around, making minor compositional adjustments). Do you see Singer in my sky? It doesn't matter, because the point wasn't to paint like him, but to learn from him --and I sure did (and I think it shows, because it's a little more sophisticated than my previous oil skies (including this later piece)).

I didn't shoot earlier stages showing the brown sky or red grass underpaintings, but you can see here the dark brown underpainting of the silo and roof. The point of this was to experiment with light final colours over a dark base and I think it worked out quite well.

UPDATE: This painting is now on the cover of the summer 2011 edition of County Magazine, which has a feature on me and Krista and Small Pond Arts. On stands now! 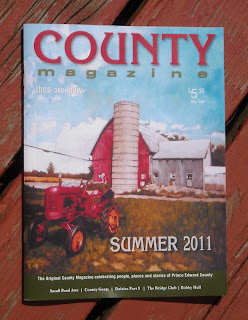