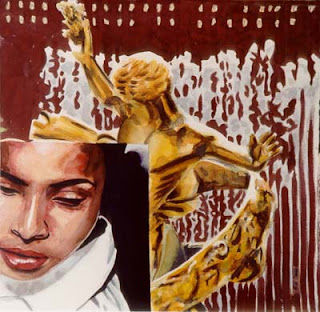 This is the fourth in my Manhattan Project series (started, logically, with 001) but it has a compositional relationship to Rush and Tea, which features the traffic of a different, yet equally urban American city: Chicago.

Here, Aisha is close up in the inset, while the background features the golden statue of Prometheus in the heart of New York City's Rockefeller Center, which I photographed during my first trip there in 1999. Mocking Atlas, featuring another Greek god, also takes place at Rockefeller Center.

Much can be –and has been– made of the juxtaposition of these two images but (unlike Rush and Tea, where a pun is illustrated) I've left the meaning here up to the viewer, because I'm not telling.