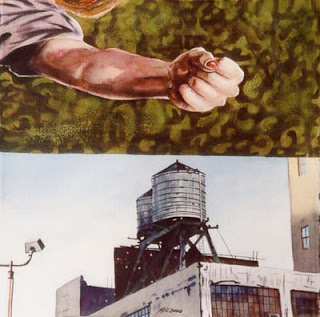 
Having watched a lot of television in my childhood in the 70s, my impression of New York City was shaped by the images on the screen. TV shows too many to recall or mention depicted a metropolis of towering skyscrapers...and some of them had weird structures on them. What were they? I never saw any in Toronto, so I just didn't understand them. Later on, in books, or again on TV, I realized they were water towers. Now, we did have a water tower near my suburban Scarborough home, but it looked like this; interesting, but not the same. So when I finally visited NYC in 1999, I was mesmerised by these things. Painting them was a no-brainer.

The model's arm at the top returns (along with the rest of her) in Flying, about a year later. 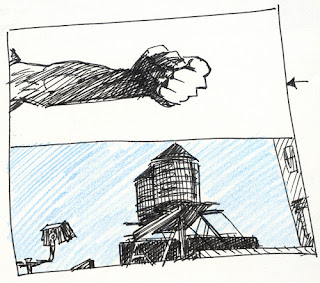