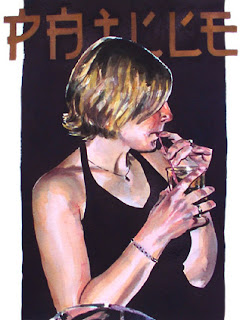 I like booze and I've featured that subject time and again over the decades (you can see no fewer than seven of my paintings involving sweet, sweet booze in this post about Artevino), and I expect to return to it in the near future (possibly after my next big series which is currently in pre-production).

The reference for this was shot around the time I was experimenting with candid photography, using a point-and-shoot film camera (which had no auto-focus feature that delays the actual snapshot and often makes you miss the moment you're trying to capture). I took this camera everywhere I went and mostly just aimed it in the general direction of my intended subjects, hoping the framing was good (or good enough to use as reference), but never knowing until the film was developed.

I was out at a bar with some friends and I must have taken two rolls of film, but a lot of spontaneity was captured unbeknownst to my pals.

The French word in (faux/pseudo-Japanese) lettering means "straw" and was added to enhance the illustrative appeal of the painting. The blacks are deep and flat to accentuate the figure.