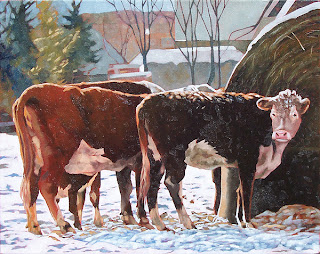 While shooting reference photos of the farmers for my Field to Canvas series, I also took a lot of pictures of their farms and, those that had any, their livestock, planning to paint some of them later. The cows in this painting belong to Blaine Way, a third-generation farmer in Prince Edward County, who also raises pork and ducks. 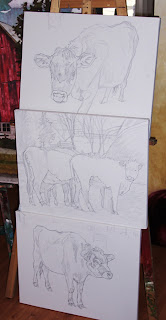 After tightening the pencils I decided to keep going and fill in some values in the cows (stay tuned for the other two). I left the big areas in this one clear, but had some fun rendering the faces, legs, and and some of the background. Not entirely necessary, but fun. 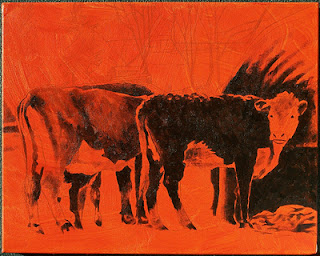 Instead of starting with my usual olive green blocking-in of darks, I went with raw umber in this one because I wanted to browns to be as rich as possible and olive green would've given the cows an oddness.