November 12, 2013
I'm in the final stages of preparation for my County 101 painting marathon next week and today I was out and about getting some last-minute photo reference for my paintings, based on suggestions provided by Prince Edward County residents. I logged nearly 200km travelling to Long Point, then to Huyck's Point, and many places in between. It was very cold, but at least it was sunny. 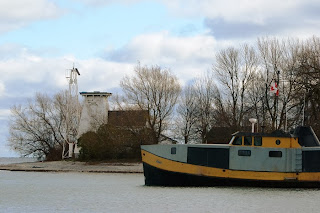 
Starting just after noon, I headed straight to the furthest south-eastern point in PEC (not including the islands just to the east) to shoot the legendary Point Traverse Lighthouse. Now a derelict building that's mildly kind of awkward to get to by car, the lighthouse is still quite an interesting thing and worth going all the way out to see it (my painting will feature a much closer view taken from right beside the lighthouse). Also, its location gives you a nice view of Lake Ontario, which is where that weird boat was probably heading. 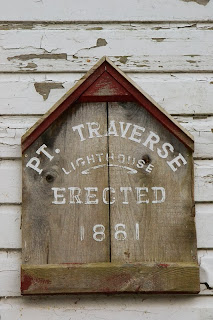 As I approached Long Point Harbour I realized I'd been there before with Krista back before we even moved out to PEC. On a wintry trip to look at properties, we explored areas without knowing anything about them, using a Red Map as a guide, but little else. As we walked along the beach we spotted a couple of tiny snakes sunning themselves together on some rocks and, ever since then (even though we never returned here together) we called this place "snakes on a beach."

Of course, there were adventures in between, and I ran into a few people I knew, including this roughly-hewn fellow in Milford ("The hamlet of friendliness!") whom I hadn't seen in some time: 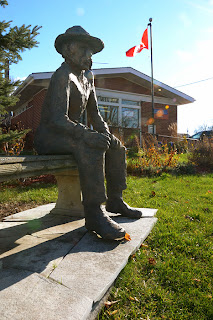 
I don't remember his name and it was so cold I didn't even think to check (the suggestion I received was "the statue of the old guy in front of the post office in Milford").

On my way to the opposite southern extremity (westward to Huyck's Point), I saw this weird gate which seemed very out of place in the woods just near the shore: 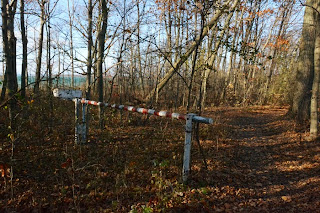 I walked along to the left and reached the shore, but the drop to the beach was about fifteen feet so I stayed where I was and got a couple of good shots looking toward Nicholson Island to the southwest. The shot below is looking northwest: 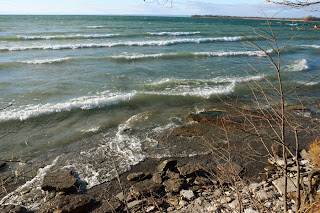 "The sea was angry that day, my friends
–like an old man trying to send back soup in a deli."

So from east to west and back into Picton I visited places I hadn't seen in years and a few I'd never seen at all. Speaking of which, I'd driven and biked past Millennium Lookout dozens upon dozens of times over the past 3-plus years but today was the first time I took advantage of the vantage. Here's a panoramic shot of downtown Picton I made from the lookout:

Now I need to select the best shots from today, get them printed, and then get them onto Bristol board so they're ready for inking next week...