This is the FAQ for my 2013 painting marathon, County 101. Last year's Burning the Midnight Oil marathon has its own FAQ and, since there's some crossover, please check that one out in case this one doesn't fulfill your needs.


You did this last year. Isn't once enough of this sort of thing?
Counting the time I did this (minus the painting) in 1989 (you can read that log here: Part 1, Part 2, Part 3, Part 4, Part 5), this was the third time I've stayed awake for over 100 hours. Last year's marathon was quite successful, so I figured one more (while I'm still capable) would be nice to close out the trilogy...or hat trick, or however you want to look at it.


Are you going to do this again?
No, I think that's quite enough of this sort of thing.


What was this one about?
After living here for three years and then painting 33 scenes of Prince Edward County  for my 33 on 33 project during the spring of 2013, I felt my education about what makes the County so special was still in its early stages (hence the title), so I thought I'd ramp it up by asking local residents what makes PEC special to them, personally. I put the call out and got more than enough to work with.

The paintings are available for sale at $101 each with half of the proceeds going towards helping Puppets Without Borders and their next trip to Ghana in February 2014.


Were you surprised by the suggestions?
I received several suggestions for the standard landmarks like The Regent Theatre, the Crystal Palace, the Sandbanks beaches, among others, but I was surprised at how personally people took this; rather than promoting their own businesses (which I have no problem with at all) most people shared childhood memories, significant family locations...deeply personal connections. That's what gave me a great variety of subjects and a meaningful collection of paintings.


How did you prepare for this?
I tried to get as much rest and sleep beforehand but that was complicated by necessary last-minute prep of the drawings and some late nights doing so. Otherwise it might have been a little easier...


How hard/easy was it this time?
Architectural shapes are easier than getting likenesses correct for portraits, and landscapes are even easier, so the amazing variety of subject matter made successful painting easier overall, but I still found it very difficult to stay awake between 4am and 7am.

That said, elements like the millions of mullions of the Crystal palace, the logs of the wood pile, and the stones in the stone wall were all pretty tricky to keep track of, but I tried to give each painting the appropriate attention it required and deserved: if it was complex (like the letterpress at Spark Box Studio) I gave it more time, if it was simple (like this silhouette) it went by quickly.


Did you watch Star Trek again?
This year's accompanying show was The Six Million Dollar Man, another childhood favourite of mine. Mostly enjoyable, but there were more than a few dull episodes and some frustratingly bad ones –but the music was almost always fantastic.

And I got really good at my impression of Oscar Goldman yelling "STEVE!"


Did any paintings get ruined by microsleeps like last time?
Nothing was ruined, but I had a few microsleeps –some in mid-afternoon (rather than between 4-7am, the most difficult time for me to stay awake, so that was kind of alarming)– and, yes, I made some unintended marks, but the nature of the subjects this time makes them less noticeable. No deal-breakers this time!


How do you feel about these paintings compared to last year?
As much as I truly believe that every human face is unique and interesting, I found the diversity in the subject matter this time refreshing and slightly more interesting, and I think I did a better job as a result (also, I had another year of painting under my belt). Rather than seeing face after face after face, the variety of the County 101 images is pretty amazing and will look great all together during the show (December 1-14) at Williams Family Diner.


Did you fall behind/get ahead?
I was well ahead by 4-5 paintings (if each averaged an hour, that is) for a while, but I started to fall behind around Thursday morning and didn't catch up until Friday afternoon. I'm glad I caught up so I could go back and add tonal washes to Norman Hardie and the letterpress. Then I was able to comfortably spend the last hour painting the silo at Small Pond Arts, which was my own suggestion.


Any hallucinations this time?
Nope. Mostly I just felt fatigue in the aforementioned valleys of 4-7am and especially towards the end.


How long did it take you to recover?
At the time of this posting it's been six days and I'm still gradually recovering by sleeping in a bit and taking it easy, so it could still be a few more days.


What's next?
The exhibition of these paintings is immediately next, so I'm getting ready for that, but then I'm back to work on my big oil painting as part of my Silver Jubilee, then back to more paintings from my Tournament of Shadows series. So, basically, more painting.

Below are the links to the posts containing the paintings as I completed them, ten at a time, during the actual marathon. Enjoy! 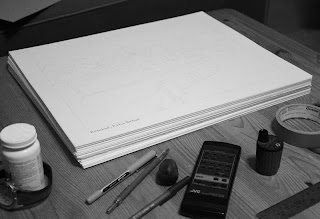