After finding a great photo of a soldier walking down a road, completely loaded with gear, my brain started developing a loose narrative for him and his experience during the war. When I say "my brain" I'm referring to my subconscious collating a lot of the research I'd been ingesting and presenting me with ideas I still don't have a complete understanding of.

Is this one soldier's progression during the war? Is it a physical or psychological progression? Both? Does it represent soldiers in a broader sense? Is it the progression of the war itself? All wars? Is it my own psychological progress while spending nine months on this WWI painting project? These paintings could represent all of those, and any "interpretations" I offer would only be retroactive; as much as I "planned" the compositions, colours, and techniques used in them, they weren't as consciously planned out, metaphorically or symbolically, as, say the three paintings of Toys or Hangin' on the Old barbed Wire (among a few others).

The ideas my brain presented were these: #1 would be rather straight-forward; #2 would have a double image and a cut in the canvas which I stitch up with red thread; #3 would be utter chaos, stylistically; and #4 would be serene but moody with a stark white background. I tried these concepts in Photoshop to see if I liked any of those "directions" from my brain. 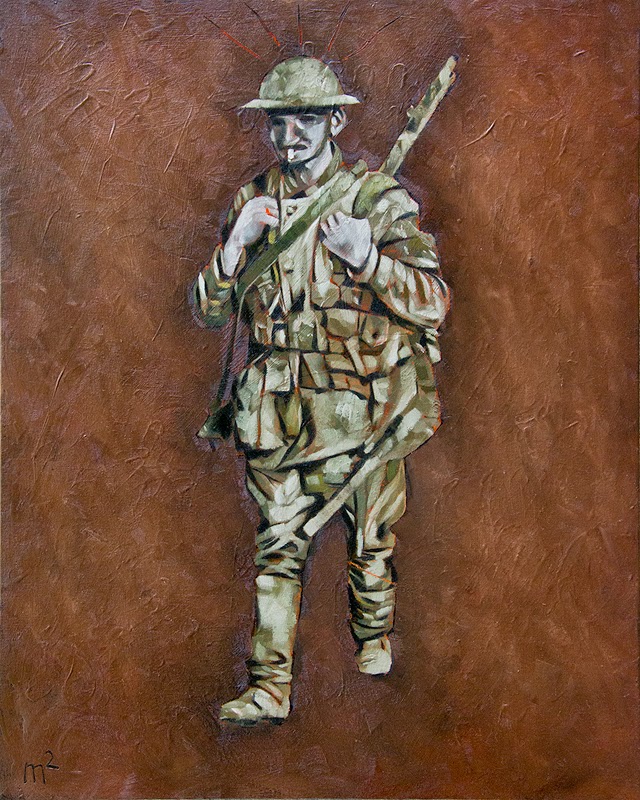 The straight-forward one; a brown background instead of green for better contrast. Ring on right hand unpainted, and a slash across his left leg, both showing the orange acrylic ground I use in almost all my oil paintings. 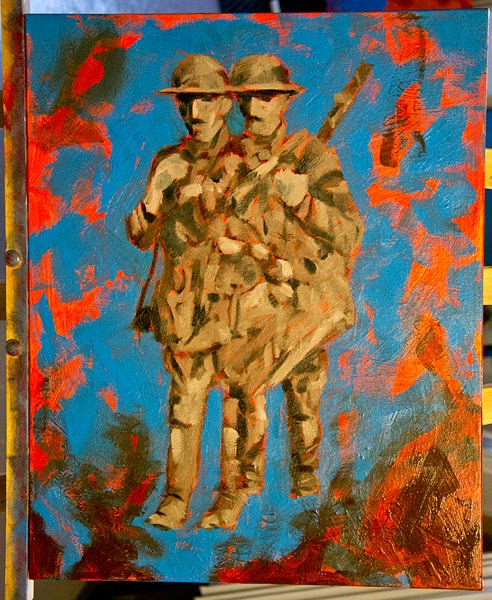 Like I said, giving my interpretations about what's going on in these paintings would be no more insightful than anyone else doing so. Guided by my subconscious, I can only guess at the double image symbolism here: is he literally beside himself, baffled by the horrors he's seen? Am I beside myself, afraid I'd be overwhelmed by the enormity of this project? (this mini series was done quite early on in the overall production (July-ish, I think)). Maybe both, maybe something else entirely. 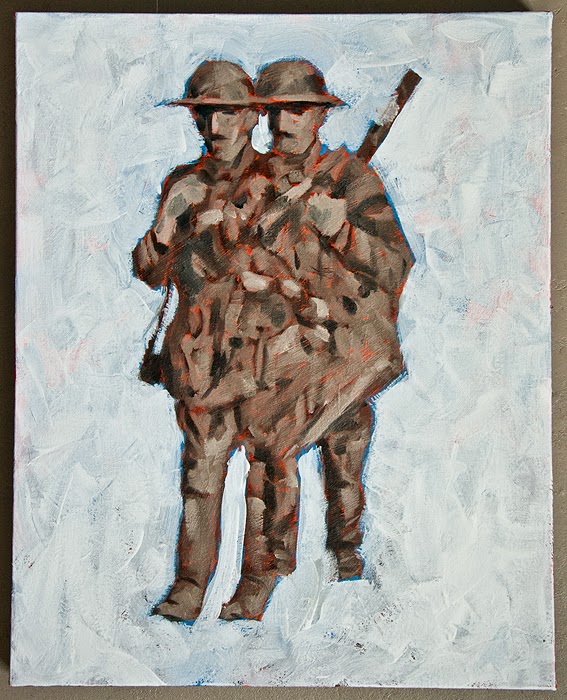 Based on my brain's initial direction (and the initial Photoshop test) I thought this painting would end up mostly white, like he's in a snowstorm or is fading away from reality, but I still wanted to put in some details and sub-surface colours before the white-out occurred, with the thinking that this would give the final painting some depth and richness. Or not –it doesn't really matter if you can glean any of this in the final painting...at least I know it's there (and I have the photos to prove it!). 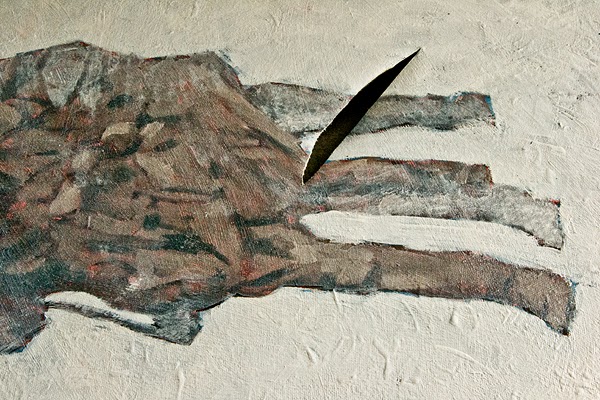 The cut. It had to be done. Most likely inspired by seeing a painting an artist (and former colleague) made where he slashed one of his paintings and then stitched it back together. There's certainly an injury/amputation/loss theme happening that my subconscious has a better understanding of than my awake-brain. 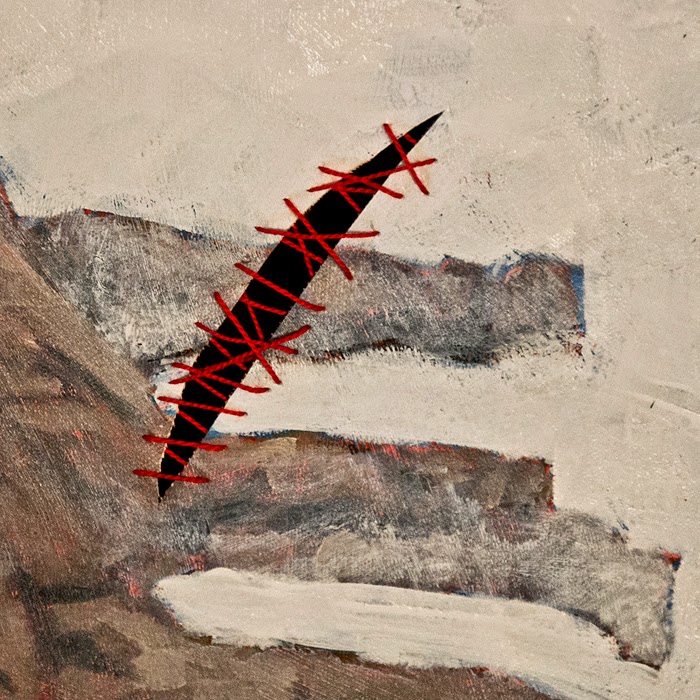 It had to be red thread and it had to be substantial. Krista suggested needlepoint thread which worked perfectly. 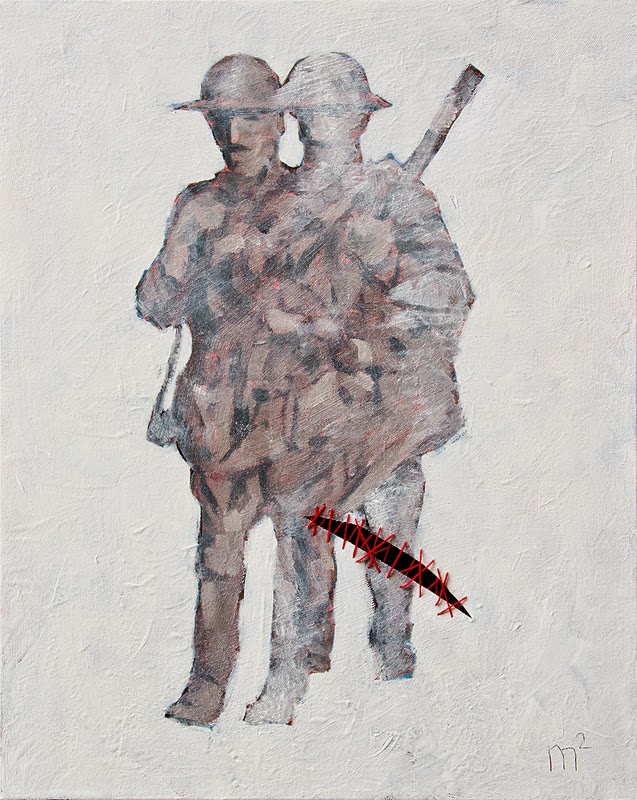 The final painting wasn't as white as I had imagined, but, as is, it's the way it has to be. 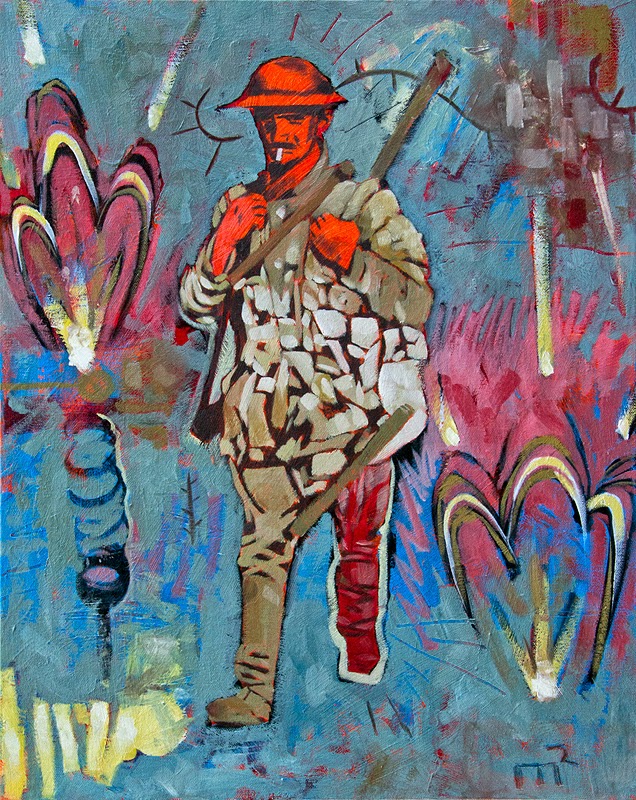 "Chaos" was the direction for this one. Absolute insanity. Even though it's very abstract and surreal, this could be in his head or a representation of external conditions. Whatever the hell the case is, I knew I had to look at some abstract art to get a sense of how I wanted this to end up.

I looked at a lot of different stuff, but my mind kept coming back to Jean-Michel Basquiat and his distinctive work. In the Photoshop test I ganged up a few of his paintings in various layers to get a feel for it and to see if it would work. Then I made up a composition in Basquiat's style but appropriate to my project. I was very satisfied with the result and this painting emboldened me to try other artists' styles (where appropriate) to diversify the story-telling in the overall project. It also helped me learn a lot about painting, trying to figure out how others did their work. Exciting! 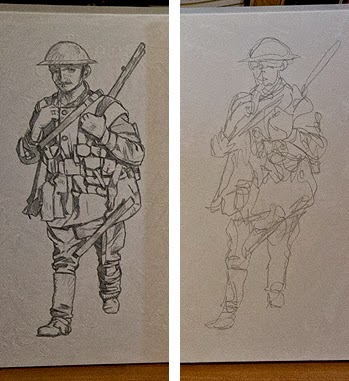 I began the last painting with a very loose drawing of the soldier, thinking maybe the lines would be visible in the end, creating a kind of blurry effect, but then I kept adding things... 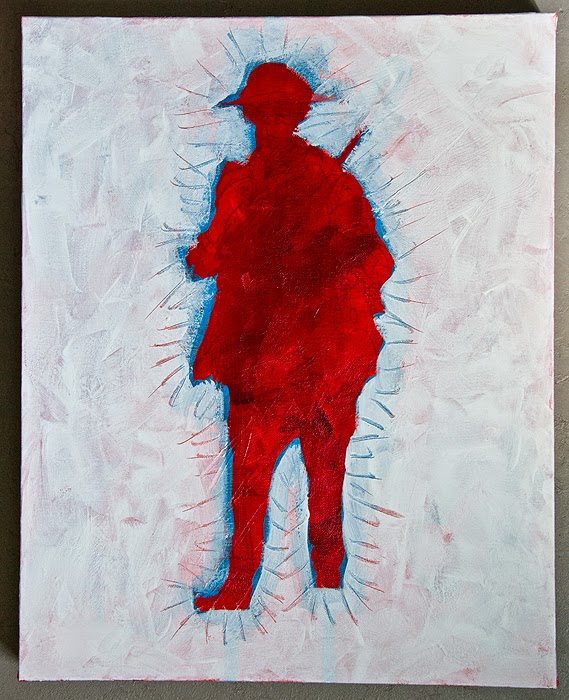 For richness and depth I used red and blue acrylic as the ground and, if I remember correctly, that's white gesso. I wasn't sure if the lines scratched into the gesso would be seen (even texturally), but they're there because they had to be. seriously: this mini series was like working on autopilot; if I believed in a muse I'd say I was guided by a muse. But it was my subconscious (through years of experience making paintings, and experiencing the world in its infinite variety) telling me to do things without explaining them. It's weird, but I'm satisfied with that understanding of it. 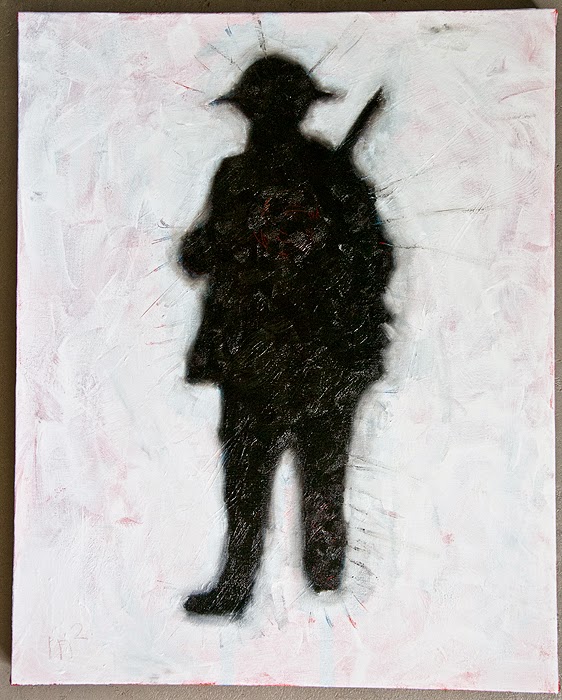 In comes the white oil paint after the blackness on the figure. I wanted something dark and textural, and for inspiration I was predominantly looking at the cover of Peter Gabriel's Passion album: 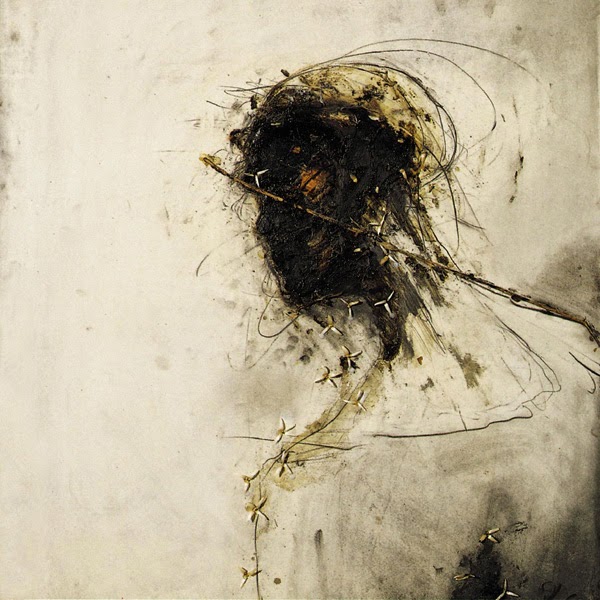 "Study for Self Image II" by Julian Grater

I didn't mix as many media for my painting as Grater had for his (charcoal, bitumen, graphite, pastel, acrylic, beeswax, dry pigment, straw, and flower petals on paper), and mine's not quite as nuanced, but I knew it had to have a similar feel. 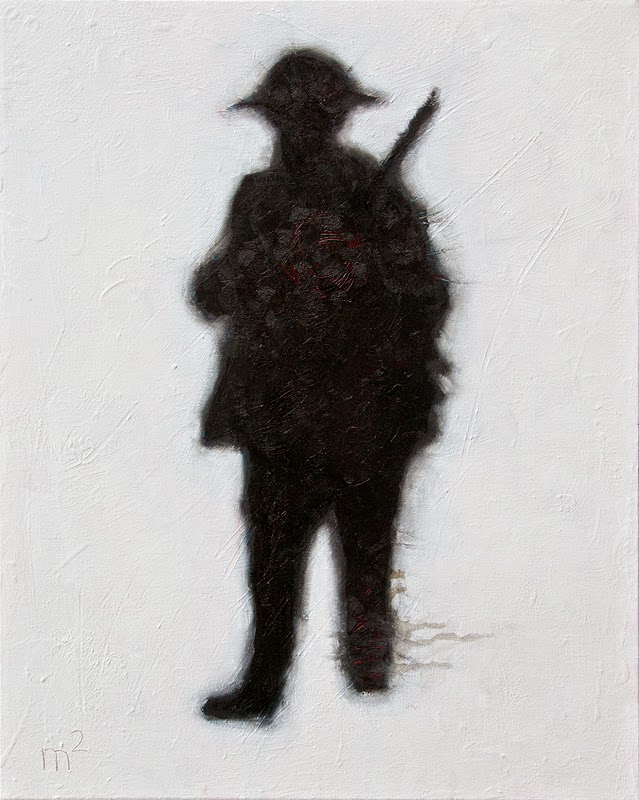 In the end I swirled the back end of my brush in the soldier's chest, revealing a tangle of red spirals, and scratched at the left leg, revealing red lines. Dripping water onto the leg made the paint run a bit, creating the trails.