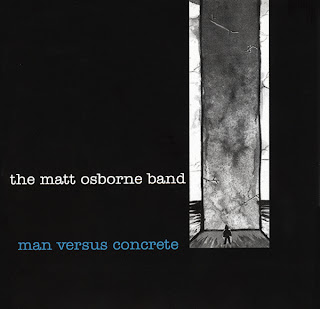 The theme of "man versus concrete" is embodied by track 8, "Reduced to Clear", specifically in the opening verse:

I'm working in a big grey concrete box. gotta squint to see the ceiling.
and Albert Speer is somewhere laughing. what used to be a couple country blocks...beneath a fake flourescent ceiling.
and how I'm here is somewhat baffling

I showed Matt a bunch of very rough sketches for the CD cover illustration, but he was really taken by one that was a literal depiction of "a man versus concrete," so I did a better version of it and that was that. Then we talked about that silly hospital chase scene in Star Trek 4 (Matt said it was too much like the Keytone Cops, and I agreed, but I said that was probably because of the light, non-threatening music that completely undermines any sense of real suspense that scene could have had).

Matt wanted a minimalist design, dominated by black and using white for text (and then we chose light blue as an accent colour). 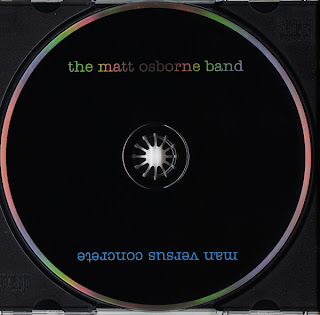 To keep costs down a little bit, rather than printing "the matt osborne band" in white, we just left the "mirror" of the CD exposed (that's why the words and the perimeter have that rainbow effect). 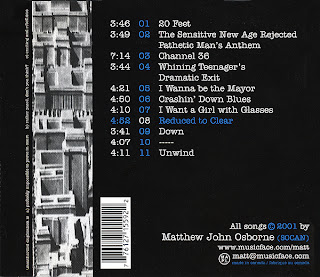 The extremely fine print running along the left side of the photo is Matt's cheeky idea of a copyright notice: "unauthorized duplication is a) probably impossible to prove in court  b) rather passé, don't you think?  c)exciting and rebellious."

As noted above, the title comes from the general theme of "Reduced to Clear" –that's why it's highlighted in blue. It also happens to be my favourite song on this CD.