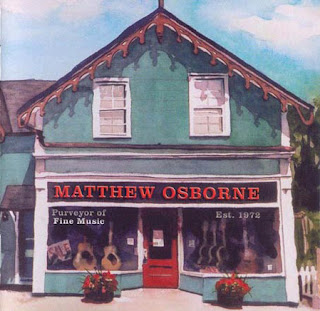 I first met Matt in the mid-90s at one of his gigs where some musician friends of mine were also playing (I don't remember anything more specific than that) and I was impressed by his voice and guitar playing, but even moreso that one guy with an acoustic guitar could produce such a full sound. Matt liked my own work, too, and I was extremely happy to have him play at a bunch of my art openings around Toronto in the following years, and I provided the layout & design and cover illustration for his "Man Versus Concrete" CD in 2001.

He died in his sleep in April 2004, but he had finished recording this CD. I don't know what title Matt had intended for it, but his supportive and generous friends and family, who were determined to make sure it was completed and made available to the public, decided to simply name it "Matthew Osborne" (initially "All the Rest"). Everyone rallied and worked hard to complete this CD as it was our way of paying tribute and giving thanks to Matt. I hope he would have liked what we did...

Goodbye, Matt Osborne
A Community Mourns One of its Brightest Artists
by Brent Hagerman

Opened cover showing full painting
(which I flipped for the CD; the original is below) 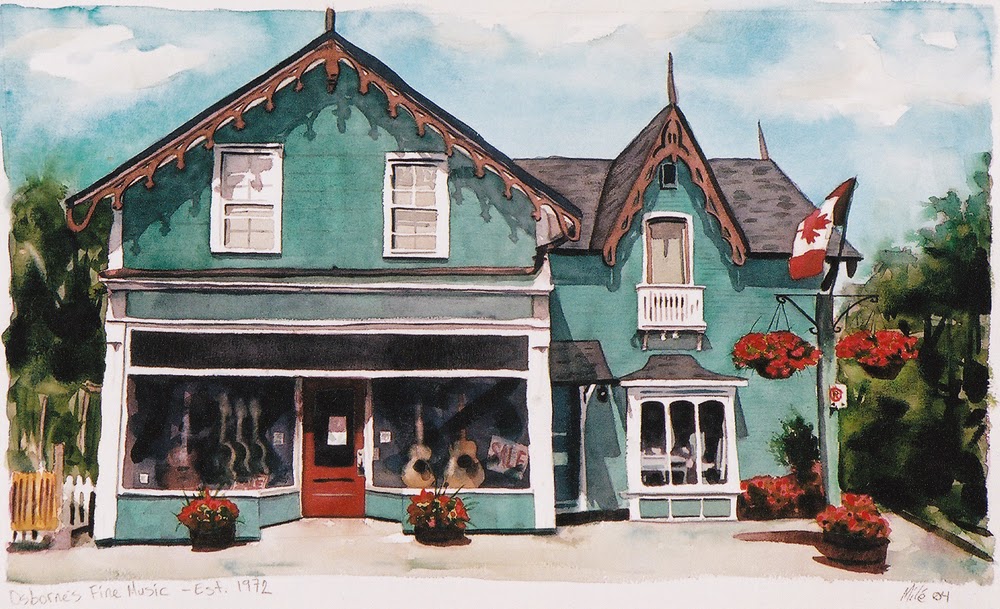 The concept of package design was that, somewhere, a shop existed for decades where Matthew Osborne sold great music.

Matt was a perfectionist and I'm sure it would have bugged him (the way it bugs me) that the text on the cover is shifted to the left like it is. That's my fault: my initial digital files were aligned perfectly, but they got shifted over by the time they went to print due to some digital instability or incompatibility or whatever. I should have made a PDF to lock in everything. At least everything else (sort of; see below) and all of the liner notes and lyrics pages turned out well.

I've employed the idea of the full painting (or some aspect) being fully revealed on Squirm's "Cold" and Uncle Seth's "Lame Suburban Poetry" CDs. My watercolour painting (of a shop in Unionville, Ontario) was quite large, but I can't remember the exact dimensions.

The vintage store sign with wear and tear was drawn in ink, then coloured digitally.
The cartoon of Matt is by Rik Emmett of Triumph. 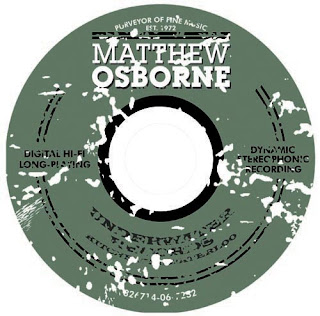 This design was meant to evoke vinyl records of old (but note that it's digital hi-fi) and also sports wear and tear.

A couple of inside references here: "Underwater Records" (barely legible, just below the black circle) isn't real, but does take its name from Matt's 1998 CD. And underneath that, Matt's hometown of Kitchener-Waterloo.

The image above is from my digital file, but when it was finally printed on the discs, they used some weird metallic ink or paint for the green which makes it excessively shiny and difficult to look at. It also makes it look very modern (despite the intentional scratches) and not retro as I intended. 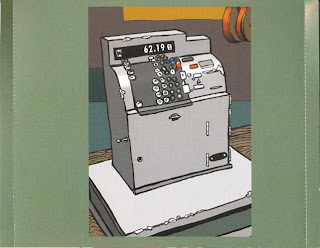 We went with clear plastic for the tray, so I drew an old-style cash register (in ink, then coloured digitally) to continue the music shop theme. "62.19" is the total running time of the CD, which directly ties in to the "receipt" on the back of the package (see below). 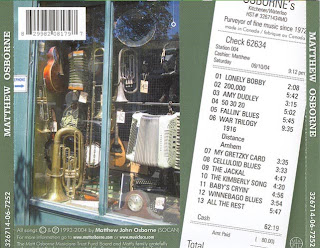 Back of the tray card.

The photo on the left was taken by a colleague, Wanda Walasinski, who shot it on Queen Street in Toronto. A stretch of street was dressed accordingly for a period film being shot there. This photo was absolutely perfect and I'm glad she allowed its use for the CD. I matched the colour of the shop in my painting to the teal in this pic.

The receipt contains a number of inside references (as well as actual, useful information about the CD): the "Check" number is an inside joke between me and a friend (Hi, Attila! Welcome to my blog!); "Station 004" is either a reference to this being Matt's fourth CD or the year 2004 (or both); the date is my birthday (in 2004) and the time is a Rush reference (2112); followed, obviously, by the track list with their respective running times, and then the total running time of the CD.