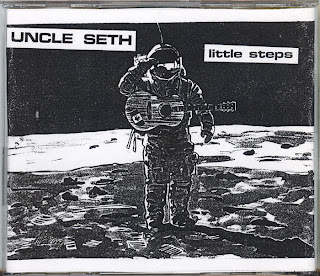 This is the cover I designed and illustrated for Uncle Seth's first 7-song EP in the year 2000. In 1997, the band Sixpence None the Richer released a self-titled CD which had the "cover" artwork located within the tray card which, traditionally, contains the "back" of the CD. Although technically "backwards," this allows for more space for the cover artwork. I convinced the band to go with this orientation, but this never seemed to catch on, and I think I only ever saw it employed a couple of times by other bands since.

My initial concept for the artwork was to reference the first manned moon landing and Neil Armstrong's "one small step" quote, with the other elements of the CD also reflecting an astronautical vibe (see below).

The cover was drawn in ink with a pen and a brush (then reduced and photocopied), but the liner notes were laid out on computer, then printed and also photocopied.. 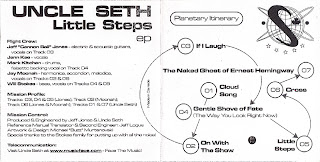 Folded in half, the right side of these liner notes was in the spot where, traditionally, the "cover" would be (but in this design it's on the back).

The track listing is represented as planets the band would visit, and I created a fun "mission patch" for the upper right.

The budget for this CD was low, so we agreed to make the whole package look very indie by limiting it to black and white and then photocopying the artwork, deliberately showcasing the imperfections that would ensue. Each CD itself was labelled by me by hand with a black sharpie (because I had the best (most legible) penmanship). 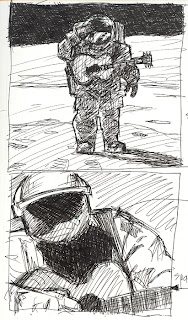 My very first sketch was very close to the finished illustration of the guitar-wielding astronaut. The second sketch is of an astronaut playing guitar during a spacewalk. 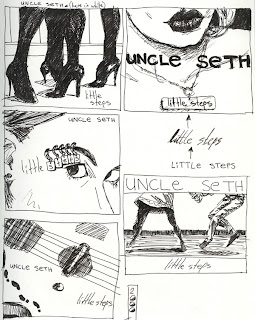 Because the band were good friends of mine, I decided to sketch up some alternative concepts (just in case something better presented itself) even though we all felt strongly about the astronaut idea. I really like the dancers on the bottom right. 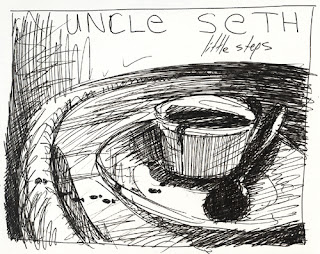 ...and one more for good measure.