I'll be in the back, and I don't need the help
I'm good here in the back, I'm good all by myself
–TMBG, "Memo to Human Resources"

Krista decided to come with me today since the Gallery is closed on Tuesdays and she wanted to hang out. I told her she'd be bored, but she assured me that she had projects to work on and she'd be okay, so off we went.

My rough plan for 33 on 33 had me at Smokes Point Road today and I ended up right at the intersection of it and Highway 33 (visible in the second pic) after noticing an interesting old fence and gate. This spot also appealed to me practically: there was ample flat ground off the shoulder for me to park the van and be safely out of traffic's way.

The sky was cloudy and rain was forecast for the afternoon but the van was perfectly parked to give me a view from inside the van that would be very similar to my outdoor setup. 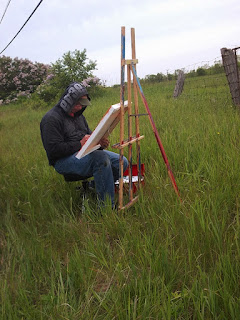 
Of course, it did start to rain, gently at first, so I went inside and painted for a bit. Around 11AM we had lunch while chatting and listening to the new They Might Be Giants album. Krista sat in the front passenger seat and, pictured below, I was comfortable  in the middle of the van. It was nice hanging out; Krista even managed to rest her eyes a bit, sunglasses on, but I don't think she was sleeping. 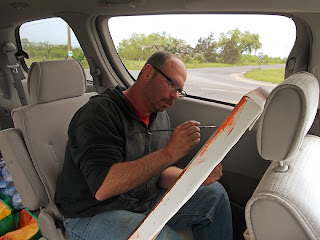 The rush of the fast cars would often shake the van a bit but it was never really a problem. I mentioned this to Krista and, before moments I had to concentrate to paint fine details, I asked her not to shift too roughly. Krista soon noticed an ambulance or something coming down the road, flashing its lights and she warned me of it (in case the sirens were on as well) so it wouldn't disturb my detail work.

I looked up in time to see a rescue truck, crossing the lanes, headed directly for us. 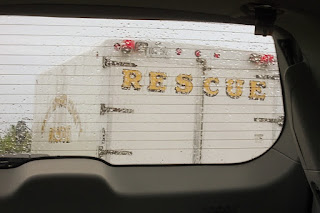 I thought maybe somebody called it in, thinking we were stranded, not seeing me outside earlier (I would have been hidden by the van to most drivers anyway). It turns out somebody did call it in, but they thought Krista was unconscious! I explained to the friendly Rescue Guy that there was no problem and that Krista was totally fine and I was just painting inside to avoid the rain. I also explained that I'd be on the road for the next month, gave him a 33 on 33 postcard announcing the project and the subsequent show at Blizzmax, and asked him to pass on that info to the other rescue folks.

No problem; he went on his way.

But just before he left we were visited by an ambulance!

Rescue Guy explained to them and there was no problem; they went on their way, too. 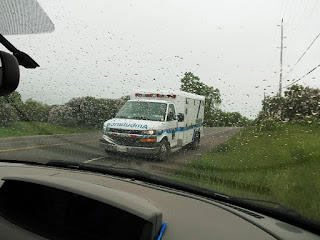 Well, Krista and I laughed about it and I joked that she can't join me for the duration of the project if she plans on taking catnaps in the front seat. She joked that it wasn't as boring as I had predicted. Fun times.

Then the cops came.

Prince Edward County doesn't have any municipal police force so they contract the OPP to take care of it. It's always disconcerting to be pulled over by the OPP, even for a simple RIDE stop, and I was kind of worried that this would be the end of not only my painting for the day, but maybe even the whole project! Did I need some kind of permit to paint at the side of the road? Were we causing a nuisance, having rescue vehicles come out? Were we too close to the radar station about 50m down the road? 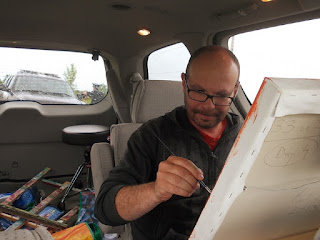 Turns out the officer who talked to us was super nice and friendly and understood our explanations. He had to check our driver's licences (I guess just in case I had kidnapped Krista and forced her to sit in the front seat, with access to an iPad and a cel phone, while I sat in the backseat and painted a fence). I handed him a postcard, too, and asked him to pass on the info to the other cops. Then he was on his way after –believe it or not– apologizing for inconveniencing me by interrupting my painting.

In the end, everything turned out just fine...including my painting.