Near the end of January this year Krista and I visited Macaulay House in Picton to meet with Jennifer Lyons and discuss how Small Pond Arts could get involved with the local museums of PEC. We were given a tour and became excited about the potential ways we could involve our art there. Krista devised a lantern-making project with a few local artists which turned out very well, indeed. These lanterns were to be unveiled during Doors Open PEC in April. 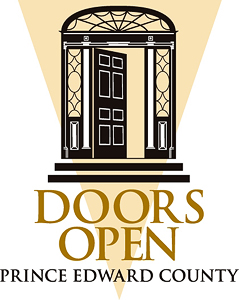 Additionally, the museums were having local artists decorate actual doors for the event which they would then auction off, the proceeds going to the museums. That's all I needed to hear, so I asked if I could get a door to decorate, and, on February 25 I brought home this lovely (and extremely heavy) door: 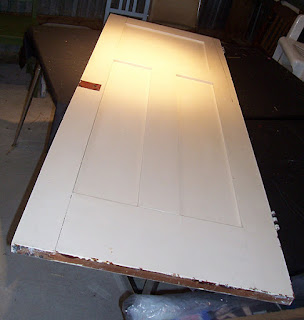 
Obviously, the door would need to be prepared, so Krista and I each had a go at sanding it down so it could be primed with gesso.

The first easel I put the door on complained about the weight by almost collapsing, and threatened to splinter if I tried that again, so I used an older, stronger easel and everyone was happy and stable. Two coats of gesso later and I was ready to pencil the images.

The idea of decorating a door sounded fun to me, and I knew from the start that I would be painting some kind of representational image, possibly true-to-period (mid-1800s), and possibly involving another photo I took of Ashley in the top she's wearing in Embroidering the Truth. Realizing that the doors would be displayed at their assigned museum locations for the final portion of the silent auction, I decided to make my door about Macaulay House.

So, in February, while waiting for my door, I did some intensive online research and, after wading through tons of images of Macaulay Culkin, I came across a photo taken by local photographer Peggy DeWitt (who shot Small Pond for the summer 2011 edition of County Magazine). The two ladies setting the table for breakfast was a scene that suited not only my tastes but my intent for the door. There was no way I could stage a scene like that and photograph it in time, so I asked Peggy If I might use her photo as reference for my painting. She happily agreed and I started working on it...but the door was extra long and I needed to fill some space. Rather than painting a flat colour or making up some other kind of filler, I decided to go back to Macaulay House and photograph the house itself.

I added my usual orange acrylic ground to lock in the graphite pencil drawing and provide some warmth to the gaps and/or where the oil paint is applied thinly.

By the way, my exclusive soundtrack for this project was the two Tin Machine albums: first Tin Machine (1989) for the ladies, then Tin Machine II (1991) for the house itself. 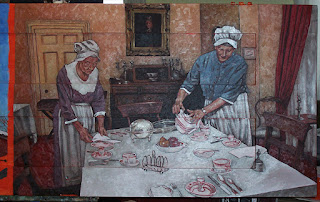 Above is a close-up of the ladies and below is the room depicted in the painting and where I was situated during the Doors Open event. I was asked to bring a couple of other paintings to display so I brought Blue, White, and Red and Embroidering the Truth (you can see part of it in the last photo below). After spending a week (from March 11–16) painting the door, it was surreal to be in the room –kind of like I'd walked into my painting. 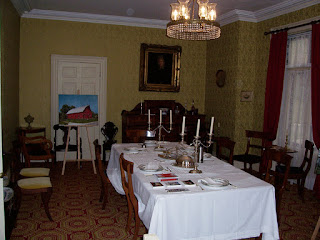 I brought a sketchbook and doodled all day, talking to curious visitors and imparting historical information about the house I overheard the guides tell others. Towards the end of the day, the silent auction got competitive, pitting the Friends of Macaulay in a bidding war with Sheila Hobson, née Bond. And that's when it got really interesting...

After Reverend William Macaulay's family, the Bonds lived in the house for decades until the 1970s when it was turned into a museum. Having the Macaulay history proper (represented by the FoM) and a former Bond girl in a bidding war for my painting was pretty exciting, and I was secretly pulling for Sheila to win because she had a personal and emotional attachment to the house –and the museums could use the money from the auction.

The bidding was to end at 4pm and the last half hour was quite tense... 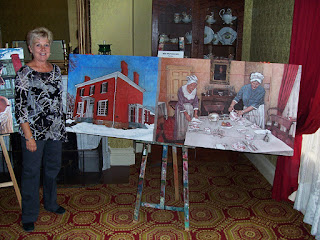 Sheila Hobson with my heaviest painting ever.

In the end, the Friends of Macaulay couldn't outbid Sheila and I found her happy and emotional response to winning the auction very heartwarming, and I really like the idea of her handing down the painting to the next generation, keeping a bit of the history of Macaulay house alive through my artwork. I really do think my painting ended up with the best possible person.

A few words from Sheila:

"My grandparents had fifteen kids. When my grandfather purchased the home a few had already grown up and left, but the ones that lived there were all in their teen years. My aunt, the only one still alive, lives in Cobourg and always wants to hear of news from her old homestead. She is an amazing woman and we visit her often to hear about the old days."