Stop to appreciate it
Let's hear the boyfriends say it
–TMBG, "It's Kickin' In"


My roughly-scheduled stop today for 33 on 33 was at Salem Road (here's my up-to-date Map of Progress) and, having noticed this interesting site over the past few days, I parked by what I thought was simply an old barn which is now the County Depot, selling grain and other farm supplies to farmers and locals alike.

It turns out the "barn" (which I ended up painting today) was actually the old Consecon train stop, dating back to the 1800s; part of the now-defunct railroad is now the Milennium Trail. The smaller building by the road used to be a weigh station where farmers would get weighed before getting a load of grain from the nearby grain elevator. The attractive checkerboard pattern is a holdover from the days this place serviced the Purina company (there are still Purina products available in the Depot). 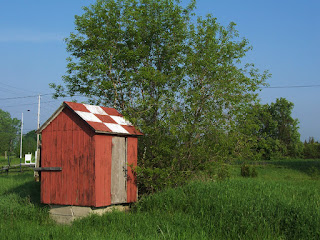 The Purina Chow resemblance is not coincidental.

The current proprietor of the Depot, Steve Gregg, came by to visit me at my easel when he arrived to open the shop and he gave me some interesting historical info, for example, a local story has it that, back in the 1920s, a nearby farmer took the train from here to Trenton to get married and immediately returned to continue working. 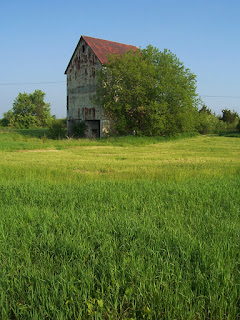 Tom Livingston, another local man who used to work at the train stop (the actual brick station next to the Depot was demolished in the early 1980s), also paid me a visit and gave me some history as well, and recounted the unusually nasty blizzard of January 1977 which buried much of the area, the snow obscuring stop signs (and higher, in some places) and shutting everything down for weeks. Also, he told me the train used to carry iron ore pellets which were shipped to the States to be smelted and that you could still find them around the lot if you looked hard enough. 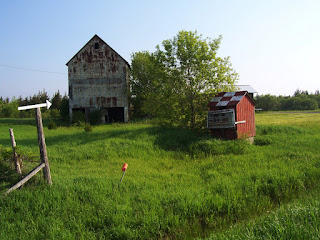 The arrow points to history.