And it's so sad
The army's good times have all gone
–TMBG, "The Army's Tired Now"

Today's stop for 33 on 33 was in Consecon. You generally can't miss a town that has its name on a water tower, but if you were to visit between 1939–1953, when Wellers Bay was home to the Consecon Air Weapons Range, you might've known you were in Consecon by the sound of bombs, rockets, and explosive projectiles fired at various targets in the area. I think the south shore of the County was similarly bombed as well... 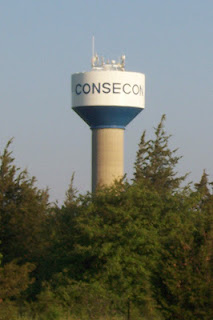 Today it's known as Wellers Bay National Wildlife Area and this was lovely morning to paint there. The name "Consecon" is derived from a Native word for the local and plentiful pickerel...or a similar one meaning the opening of a waterway (choose your own side on the debate). You can get more information at the kiosk I parked near, which features a big map of PEC (the orange dot on the left is where I was today; here's my own up-to-date progress map). 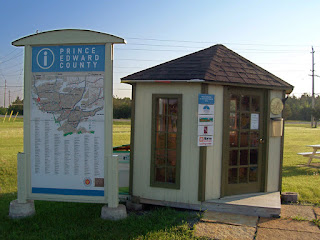 If you turn around from looking at that map, you'll find The County Junction Family Diner (I didn't eat there; this isn't a food tour) which has a really cool wagon out front, displayed like some historical monument, but there isn't any plaque or anything, so it's probably just a nifty antique. The milks cans are chained down, but who's going to stop someone from pulling away with the wagon? Maybe the wheels are somehow locked up, I don't know, I didn't look that closely into its security features. 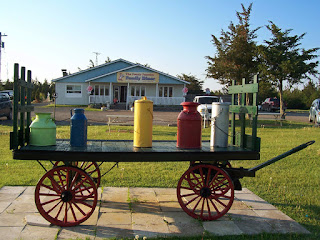 After having the wind knock my painting off my easel too many times on Day One and Day Two, I decided to secure my canvas to the easel using twist ties around the hanging wire (yes, I've pre-wired all the canvases for this project). I forgot my twist ties today, but came up with a handy-dandy alternative solution using my little digital camera's case and strap –which works even better because I can still rotate the canvas without having to untie it. 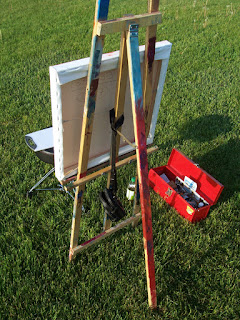