Bay and Gavin run Honey Pie Hives and Herbals and their products can be found in shops from Ottawa to Toronto and, of course, throughout Prince Edward County. For about ten years they've been making soap, teas, candles, lotions, etc., but they're probably most famous for their unpasteurized honey, and it was this aspect that I chose to feature in their portrait.

The idea I came up with to tie in their honey production was to superimpose a hexagonal (i.e. honeycomb) pattern on the painting and then make subtle colour shifts to differentiate the cells (see below). This got tricky when it came time to paint the grass and trees because of all the complex details.

I shot the couple in various locations (starting with inside their straw bale house, then moving outdoors), but this painting is based on a photo taken when we approached a group of bee boxes to see what the honey bees were up to. They're mostly dormant in the winter, but a few come out from time to time...to poop. You can sort of see a bee on Bay's hand and a few are on the snow (in the detail further down). Some bee boxes also appear in this portrait on the far left side but aren't shown here.

Towards the bottom of the painting the cells were easier to differentiate, but the "subtle colour shifts" ended up not being so subtle...but still successful, overall, I think. 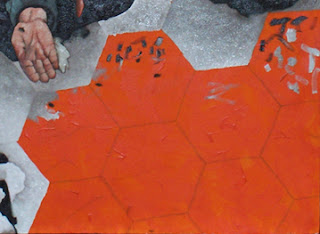 Even Bay and Gavin's soft shadows on the snow were tricky to modulate subtly in the cells and still keep them convincing. 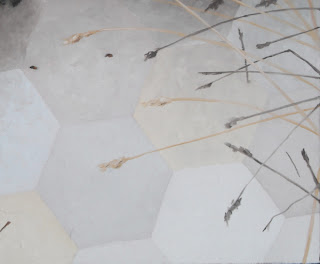 I simplified the tall grass to keep the painting from looking too cluttered --besides, the top portion has lots of wintry foliage already.

See the full version of this painting HERE.