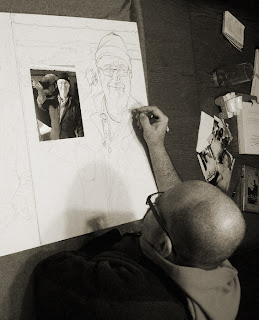 Krista and I took some much needed time off at the end of January, but we decided from the start that it was going to be a working holiday, so I prepped three Field to Canvas canvases to take with us to Arizona to paint a few farmer portraits in what we dubbed Small Pond Southwest. It was a greatly successful trip and Geri and John Della Bosca were among the subjects I took down.

In the above photo, I'm tightening the pencils on the side of the painting containing John's portrait. When I arrived at Stone House Farm on County Road 15 (in Prince Edward County) John greeted me heartily, wearing blue coveralls and a tuque. He welcomed me inside where I met his wife, Geri, who was wearing a nice sweater and looking much more formal than John. I had no preference as to how my subjects should be dressed (I told them they could wear whatever they wanted) but Geri insisted on looking her best (fine, by me), and insisted John do the same and get out of his work clothes. John, though,    was adamant that since I was there to create farmer portraits, he should proudly look the part (also fine, by me). They agreed to disagree and I photographed them separately, knowing I'd figure something out later on.

I decided to create a split portrait: Geri with a basket of fresh eggs on one half, and John with one of their beautiful chickens on the other half. The split was out of necessity, having shot the subjects separately in different types of outfits and circumstances, but it also works very well conceptually, with the chicken flapping its wings outdoors and the eggs all neatly gathered together indoors. Now it was up to me to finally decide the age-old question: which came first, the chicken or the egg? 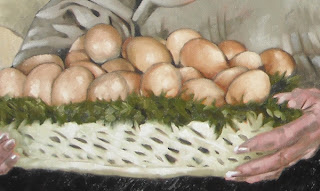 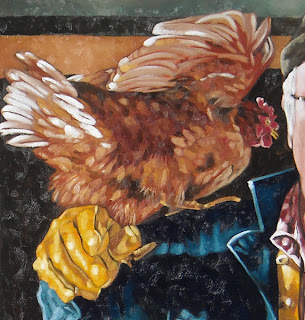 Gorgeous chicken on John's shoulder.
See my separate portrait of the chicken HERE.

To see the full version of this painting, click HERE.