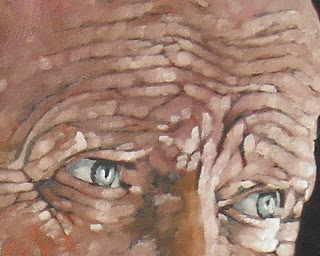 Ted's eyes seem to tell it all.

Also known as the "Fish Lake Garlic Man," Ted is so famous around Prince Edward County that I could have just used this close-up as his portrait and people around here would probably still recognize him.

Ted came to Canada in the 1970s and it was while working in a non-agricultural job that he learned that Canada imported its garlic from China. After looking into this further, Ted came to the conclusion that there was no reason Canada could not be self-sufficient in garlic since our climate was ideal for growing it. He then took it upon himself to become an evangelist for garlic and, since 1978, apart from operating his wildly successful garlic farm, he's been interviewed and featured in dozens of papers and on nearly as many TV programs across the country and abroad (he showed me several binders of clippings).

A strong advocate of locally-grown garlic, Ted's entirely self-taught with regards to the scientific research into all aspects of it, regularly helping out (and correcting!) governmental agricultural research.

It was only fitting that I paint him wearing a garland of his beautiful garlic (incorporated from a photo he supplied). 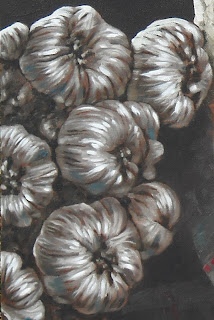 After our photo shoot, Ted gave me a bulb of garlic which was then split up into its separate cloves and planted in a large pot. A few months later, by early March, sprouts were coming up and now the garlic is ready to transplant into our garden. The photo below was taken in the midst of writing this post (just after 10am, 10 May 2011). 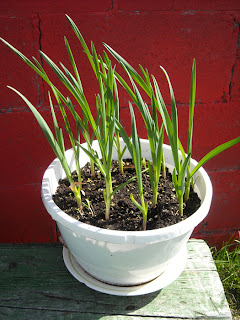 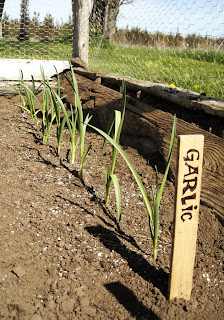 For fun, here's an MRI of some garlic from a great blog by Andy Ellison. 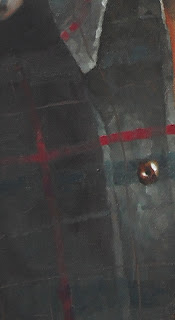 Shirt area detail.
I tried to make this look as flannelly as possible;
seeing the weave of the canvas helps. 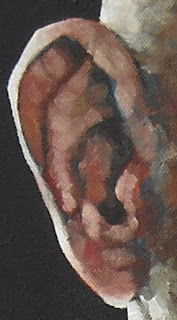 I love cropping areas that look like abstract, impressionistic paintings. 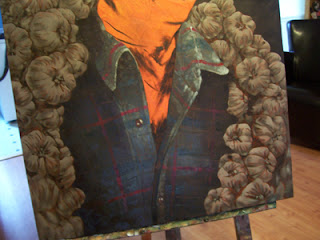 
UPDATE:
This painting is now part of the County of Prince Edward Library and Archives collection.
See the full version of it  HERE.