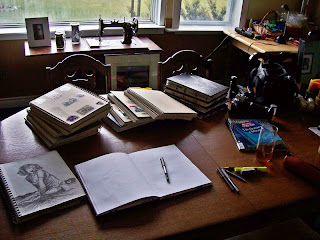 This picture was taken back at the end of November 2010 as I ransacked my old sketchbooks for ideas and titles for my big winter painting project.

About a month earlier, at the suggestion of our friend Tammy Thompson, Alexandre Fida of Angéline's Restaurant and Inn had asked me if I wanted to have an exhibition in their restaurant the following summer. The theme: portraits of local farmers. I gave him an enthusiastic "yes" and started planning the minute I had some actual free time. That rainy day in November was perfect for it.

Lukas Lister-Stevens and Ted Maczka form the age brackets of this series; Lukas being the youngest, Ted the oldest. Obviously, these aren't all the farmers in Prince Edward County (that portrait project would take years!), but it makes me happy and I think it's important to be able to represent such an age range, representing a continuity --especially since the average age of farmers in Canada is around 55.

I knew I would eventually have to visit the farmers to take photos of them for reference (with my trusty 35mm film SLR (digital point-and-shoot only as back-up)), so, with the enormous help of Vicki Emlaw (one of the subjects to be painted), I started compiling a comprehensive contact list of over two dozen farmers. My initial goal was to paint 15 portraits (36" x 24" each) by June 2011, so I only needed that many farmers to agree to be painted, but about halfway through, I realized I could only complete 12 before May (in order to properly promote the show). That dozen took four months, the last one still only 99% complete as I type this. Also, although there are only 12 paintings, there are actually 16 people represented, since there are several portraits of couples.

Unsurprisingly, my enthusiasm for this series comes mostly from my growing interest in farming (my parents both come from farms in Macedonia and Krista and I have a nice garden of our own at Small Pond) and my previous artistic explorations with our often disconnected relationship with the origins of the food we eat. Meeting these farmers would reinforce my opinion that they are an extremely important part of human survival: no farming = no food. Period. To emphasize this importance, I've had the farmers fill out a brief questionnaire about their farming life (how long they've been doing it, what they grow/raise, contact info, etc.), which will appear underneath their portrait.

Below are links to my posts about the farmers and detail views of my portraits of them (with a link to their full portrait at the end of that post):