Erika runs Reachview Farm (which is also a bed & breakfast) in Prince Edward County and has been farming for about ten years. She's got vegetables, fruit, grain, hay, sheep, goats, and chickens, but there's another feature that Erika's got that makes her operation quite remarkable: she's entirely off the grid; she supplies her electricity via wind and solar power.

None of the farmers featured in these portraits work alone, but, for various reasons, some appear solo and some appear as couples. Erika is not the only woman in the series, but she is the only woman who appears by herself. Just as I felt it was important to show an age range, it was important for me to represent both men and women here, and I am very happy to be able to include Erika.

Close up, the weave of the sweater becomes a big, blue field of abstraction.

There are areas of thick acrylic underpainting I added for texture (click on the pictures above and below), but only surrounding Erika's head and neck because I wanted to render her skin softly by smoothly blending the paint --the opposite of the way I painted Ted Maczka. 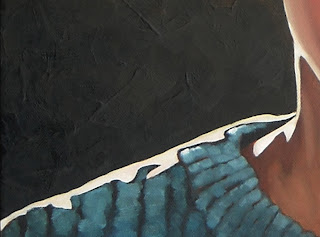 When I photographed Erika in her home she was backlit by a bright window, creating a nice sort of halo around her which I chose to emphasize by making the background in the painting very dark green.

See the full version of this painting  HERE.