Lino, AKA The Accidental Farmer, runs Bethel Organics and has been farming chickens, hogs, ducks, and veggies for about three years, but specializes in heritage breeds: Chanticler Chickens, Canadian Horses, and Berkshire Hogs. The last of which, Krista and I were lucky enough to taste in the form of naturally-smoked, nitrate-free, organic bacon a few weeks ago when Lino announced he had some available. I saw the notice on Facebook and immediately drove out to Lino's and bought about 7 pounds of bacon (most to freeze for later enjoyment). It was the most bacon I'd bought all at once, but worth it...and I may have even met the source pig when I went out to Lino's in the winter for our photo shoot.

The first time I saw Lino was during the 2010 Maple in the County festivities in the Town Hall in Bloomfield, PEC, where he was selling his wares as The Accidental Farmer and I was displaying some of my artwork, representing Small Pond Arts. I didn't actually meet him until later that year when Chesterfield's in Picton had a Pork Night where various cuts of pork were served with a local cider from the County Cider Co. that went beautifully together. Check him out with some of his gorgeous produce in the second half of this short video clip. Here's another, more recent, video clip featuring Lino.

(forgive the low resolution of this image)


Click on the pic above and you'll see some Xs which I used to indicate to myself areas that were to be painted black (actually a mixture of several colours that appear as "black"). It's an old comic book shorthand from the penciller communicating to the inker that an area should be filled in solid black, without the penciller having to spend time (and graphite) needlessly filling in those areas. 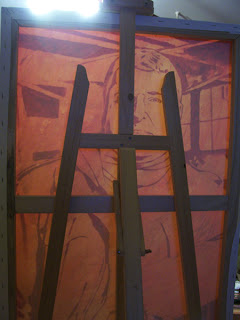 
In this sneaky preview shot from behind, you can see the orange acrylic underpainting showing through as well as the red oil paint underpainting filling in the darkest areas (which I marked with an X in the pencilling stage) and describing various other forms. I only do the red oil if I feel I have enough time for it to dry before continuing. The concept is the same as the orange underpainting: where layers of paint are thin, a warm colour shows through, rather than the white of the canvas. I especially like red for dark areas (maybe I should just do this red stage with acrylics from now on...hm, I'm learning while blogging!). 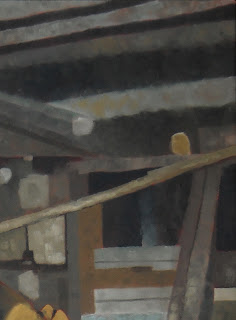 A close-up of the background becomes an abstract painting. 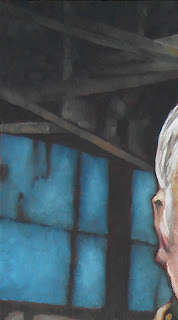 Another close-up view.
(that's dusk outside the barn windows) 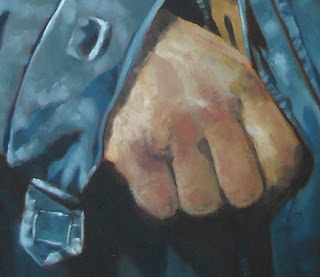 In this close-up of Lino's hand, you can see the dark areas indicated by the Xs in the pencil detail above, as well as some of the orange underpainting showing through. 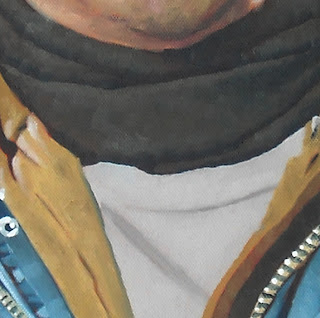 Note the layers of clothing.

At first I was a little disappointed that I'd have to shoot all my Field to Canvas subjects during the winter, missing out on some potentially great shots of the farmers working their fields, but I learned immediately during my (very cold) visit with Lino (the first farmer to be photographed for my reference...and also the first portrait I completed) that farmers work all year round. Sure, the working-the-field aspect is seasonal, but crop growers still need to prepare for the coming year...and those that have animals certainly need to tend to them even on the coldest winter days. The care and attention (and love!) for their animals I witnessed in visiting the farmers was evident --and comforting, knowing the food produced by them was in good hands.

One of the most memorable moments of my visit with Lino was seeing him enter a hog pen and play with Orson, a gigantic, 500-pound porker who thought he was a puppy, playfully running towards Lino like a freight train. With puppies, a gentle pat is a nice show of affection, but Orson liked to be punched, and the more Lino punched him, the more Orson seemed to be loving it. It was strangely adorable.

UPDATE: This painting is now sold.


See the full version of it  HERE.