John Nyman's been farming all his life (over 31 years now), but six on his own (but that doesn't mean by himself). Visit John's website for tons of great information.

I visited John's farm in the dead of winter, and there he was, clearing snow, feeding the sheep and cows, tirelessly (and impressively, to me) just doing what needed to be done --and without complaint, I must add. That's another thing I found all my subjects had in common: although a few explained some of the frustrations and challenges facing farmers (versus the big agricultural corporations like Monasnto), they never complained to me about the actual work they needed to do (I've seen it; it's not easy work). These great folks are examples to everyone. 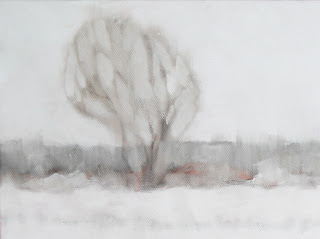 This portrait allowed me to incorporate elements of John's farm, giving me the chance to try out different techniques and subject matter. Like in my portrait of Lukas Lister-Stevens, I wanted to use a shallow depth-of-field to help make the foreground subjects pop. My approach to convey this effect was to render the background elements in an impressionistic and slightly abstract manner. The detail above --just a tiny part in the top left of the actual portrait-- could be a satisfying winter landscape on its own. 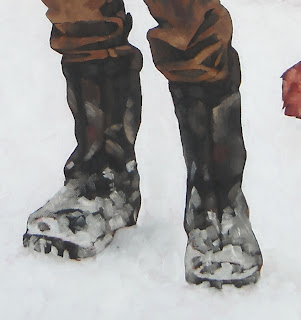 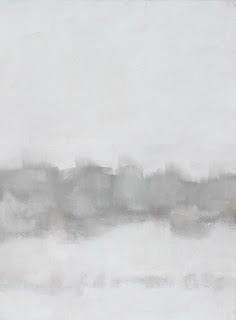 The now-obligatory close-up detail masquerading as an abstract painting. This time: a blander, boringer, lamer Rothko. 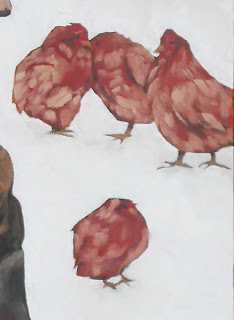 Talk about free-range! These pretty little chickies were wandering around here and there, contrasting sharply against the snowy ground, looking incredibly healthy and happy (and, therefore, incredibly tasty!). Also farmed by the Nymans but not featured in this painting: sheep, pigs, turkeys, and maple syrup from their own sugar shack. 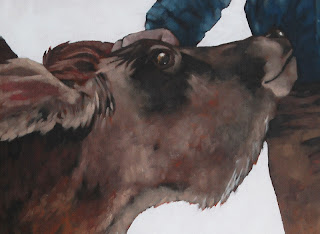 My portrait of John Nyman is actually made up of five separate reference photos: John's head is a separate element from similar pic, turned more appealingly to the camera, because his head in the shot of him petting the cow was turned downward at an angle that didn't show his features very well. The chickens are from a completely separate photo of them by themselves, incorporated here for compositional balance. The boots had to be drawn from a separate, full-body shot where you can see the boots because in the ref I did use, the photos cut him off just above the knees. And the cow and his right petting arm are from a shot that better denotes their friendly relationship.

When I say "friendly relationship," I'm not exaggerating; these Jersey Cows were very friendly and curious. I don't know if it was the one in the final painting, but one cow did come up to me and began licking my coat's sleeve just like a dog might. It was a leather coat, though, so I don't know what that says about the cow...

See the full version of this painting  HERE.