When drawing up the approximate stops I would make for 33 on 33, I used one of the ubiquitous "red maps" of Prince Edward County and drew dots spaced somewhat evenly across Highway 33. Sometimes, though (like today), the roads I made note of aren't visible from 33 itself and have no signs to tell me where I am.

For example: today I was "supposed to be" approximately just past Alexander Road, which is just north of Ould Drive. Neither of these two roads are accessible directly from 33 and, as I just mentioned, there are no signs to let me know where they are, so it was hard for me to figure out where, exactly, I was. It turns out Ould Drive is roughly where Partridge Hollow Road (tomorrow's stop) is.

This caused me some confusion for the first few days as I plotted out my Map of Progress, but I've corrected it and it's more accurate now (as well as being up to date).

Confusion sorted in the car, I parked at the entrance to the Lafarge quarry and had a look around for some good scenery to paint. Looking right (and to the north), there was a nice rocky view: 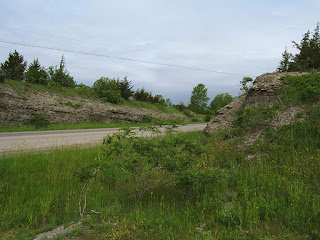 ...but looking left (and to the south), there was an even more interesting view: 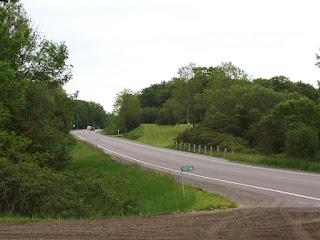 ...so I set up my gear and prepared to get started –a little later than normal because I was interviewed over the phone once again (previously for my Burning the Midnight Oil painting marathon back in December) by CJBQ (800AM) in Belleville.

Just as I'd set up, a van pulled up and, based on my experience from Day Four, I was worried it might be trouble, but it was just Nick Nowitski, a councillor for Ameliasburgh, who heard me on the radio and wanted to stop by and say hello. We had a nice chat. 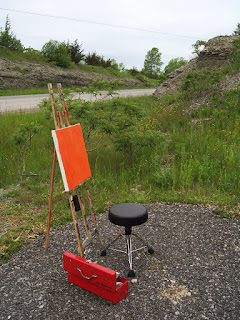 
The sky was overcast and rain was expected, but I was pretty confident I could get started outside and move inside the van if I needed to later. It started to rain lightly so I tried to reposition the van to get the same view as my setup, but it didn't work out because of the gravel dropoff.

So I picked a different subject which was directly across the street. I painted the entire time inside the van with the side door open, but, instead of raining harder, the sky started clearing. Oh, well.