The third leg of my 33 on 33 project has been plagued by rain and, even though this was intended as a plein air painting exercise, I've been painting inside my van for a lot of it because of the rain. Sometimes I've been able to open the side door and let more light and air in, but usually I was enclosed in my vehicle. Sometimes the skies cleared by late morning, but, by then, I'd finished or nearly finished the painting, so I just stayed inside.

Today, once again, started out with pouring rain and my location was pretty soggy and looked quite dreary: 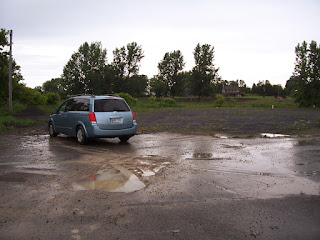 Since I doubled up on my locations in Bloomfield on Days 23 and 24, I decided to go a little further east and I found this sort of blank emptiness between Bloomfield and the Picton roundabout. In the distance of the photo above is a farmer's field with grazing cows which is part of Hagerman's Farm (the main buildings of which are just out of frame to the right), but the dead, muddy lot makes it look like I'm in the middle of nowhere. Here's my Map of Progress. 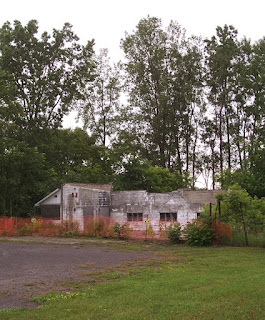 Looking like a bombed out garage or service station, I thought it would make a good subject for today's painting, but upon closer inspection I realized it was quite boring and maybe a bit too depressing. 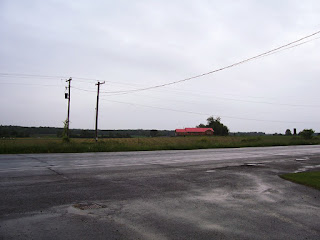 
I found the bleakness of this view kind of interesting with that long red roof holding out hope against the grey, wet sky, but decided to paint the view just to the right (including the pole those wires on the upper right are attached to).

So today's painting kind of reflects the mood of the weather in recent days, but I don't think it's as desolate as these photos would imply.