She's a different kind of girl
The kind you see in pictures
I think you might have seen her
Richard's on Richards
–TMBG, "Vancouver"

Aside from my starting point at the Murray Canal and my ending point at the Glenora ferry dock, The Regent Theatre on Main Street in Picton was the only subject I knew without a doubt that I would be including for my 33 on 33 project. 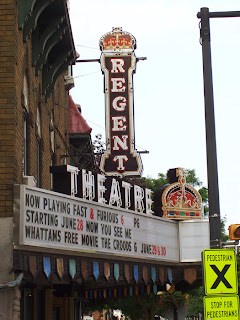 This year the Regent is just shy of celebrating its century of operation, having opened its doors in 1918 by the Cook family, working out of a former grain store and office building that was itself already 80 years old. A major renovation and redesign completed in 1922 saw the addition of the vast auditorium and art deco motifs. Here's a cool video briefly detailing its history. 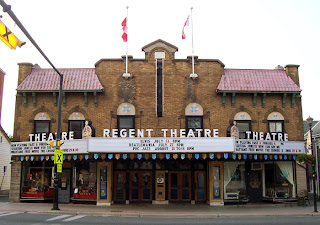 Ground floor on the left is the box office for live-on-stage and live-by-satellite events at the theatre, and on the right is The Regent Café, owned and operated independently and separately from the theatre. 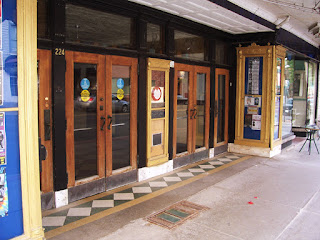 The theatre underwent another renovation a couple of years ago, seeing the installation of a digital projector (the old film projector I first trained on is still in the booth and functional), the improvement of the auditorium, washrooms, and concession area, but the front doors and lobby area with its ticket window were preserved and partially restored (those front doors are nice, but drafty in winter). 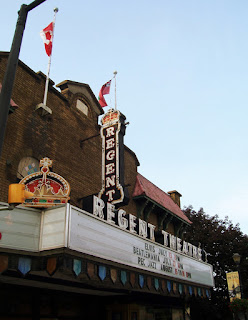 I absolutely love this marquée in the daylight, but seeing the neon lights at night is something pretty extra special. My only problem is with the green lights that remained on the marquée's face after the recent renovation which enabled the display of showtimes. They're neons remaining from the previous look of the marquée, but they should have been swapped out with white lights to make the words more legible (and it would look less tacky). 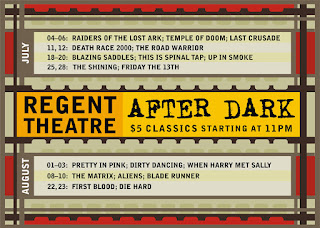 Since becoming one of the projectionists at The Regent in 2010, I've taken over the scheduling and screening of the monthly Classics, setting up two streams, Vintage matinées, and Modern evening shows. This summer I've been given the green light to try something a little bolder, instituting the After Dark program. I figure since the days are so long in the summer and most people are having fun outdoors at the beach or wherever while it's still light out, late night screenings would be a worthwhile experiment (in a larger city like Toronto, this would be an easy success). So this July and August my friend Clinton and I have come up with seven themed weekends featuring 18 classic movies to screen starting at 11pm. We're pretty damn excited about this. 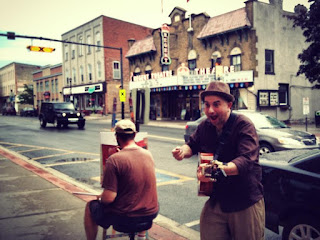 Rocking out (in and out of the rain).

As on Day Five, my friend, singer/songwriter Jeff Jones came to hang out with me and play some music while I painted. Being a Saturday and having relatively decent weather for much of the morning and early afternoon, we had huge numbers of people stopping to chat with us and/or just check us out and see what we were up to. 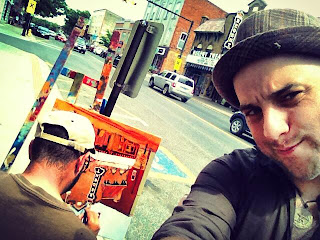 Blame it on the rain.

With Jeff's expression, the Dutch angle, and my upside down painting, I think this picture pretty much sums up our struggle to stay out of the rain, moving in and out of a storefront undergoing renovations (here's my Map of Progress). Nearing the completion of the painting, I decided to let the rain fall on it for a short while, creating streaks and recording the elements in a very spontaneous and natural way. I had meant to let this happen for quite a while now, and after encountering rain for about half of my painting days, it was about time.