Never had a pocket watch, never counted backwards
You won't remember why you liked him
–TMBG, "Hypnotist of Ladies"

Today's stop for 33 on 33 had me in the hamlet of Hillier (here's my Map of Progress), which has a population of roughly 100 people. I doubt, though, when the community was established in 1823, that anyone would have guessed it would one day be known for its wineries. 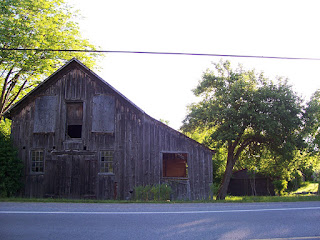 I first parked beside this barn, thinking I might want to paint it in an unusual way (having done many local barns in my usual way for my Barnscapes series), but I kept looking around for options. 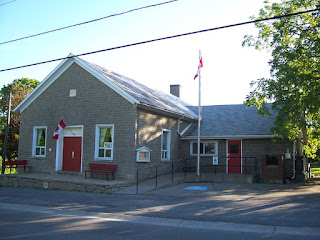 A little ways down the road I saw the Town Hall, the municipal centre for Hillier for over 140 years. Built in 1867, it's the second oldest town hall in the County, the only stone building in the village, and is now marked as a national historical site (probably in part because John A. Macdonald supposedly* attended gatherings there and was a visitor to the community on a regular basis).

Today the wheelchair-accessible Town Hall is the meeting place for the Women's Institute as well as the Hillier Recreation Committee, which has euchre mornings, a coffee club, dances, and various community events for children. The Hillier Volunteer Firefighters host several events there, too.

But it was also too backlit, so I kept looking... 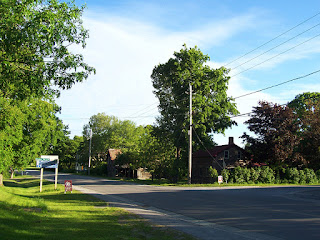 Hillier looked beautiful this brisk morning but I still needed a subject for my painting... 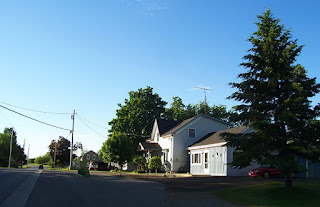 This is actually the view from just beside my van, having chosen a subject in the yard next to the house in the shot above. 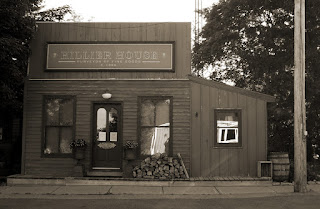 
I have no idea what this shop is like inside, but the outside looks great in black and white, doesn't it? Hillier House, c.1868, has some history behind it as well. Now an antique shop, it was originally the hamlet's general store (until March 1986)...and, guess what? John A. Macdonald shopped there!

I almost painted this, too, but for the damn backlighting.

*If pressed, you could probably amass a list of a million places in Prince Edward County that lay claim to some connection, both verified and non, to Canada's first Prime Minister.
I'm tempted to start claiming that Sir John A. played Québécois folk songs with Louis Riel in my silo –the original Silo Sessions!