Through the overgrowth
Of the underbrush
Shone a fossil tooth
That I must have dropped
Very long ago
Which reminded me
How we wound up where we are now
–TMBG, "Canajoharie"

It sounds kind of monumental when I put it like this: it took me 26 days to reach Picton.

Named for Sir Thomas Picton (who was a big jerk according to the account of his career in the New World) and known as the town where John A. Macdonald managed a law office for his uncle, Picton is Prince Edward County's largest municipality and it's postal code (K0K 2T0) encompasses such a large area that even Small Pond Arts is considered to be within its limits. 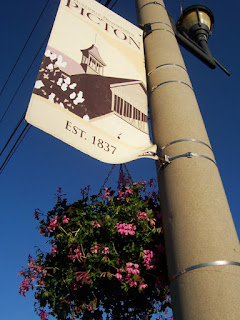 I initially planned to be at the roundabout on the outskirts of town, the junction between Highway 33 and Sandy Hook Road, but parking close to it wasn't an option and there isn't much to see there, anyway. Conceptually, painting in the middle of a landscaped roundabout is a great idea, but the painting wouldn't have been interesting. And I would've had to use a certain Yes lyric instead of the usual They Might Be Giants quotes.

The banners on the lampposts in town were designed by my friend, Carl Wiens, world class illustrator and cycling enthusiast, who also just happens to live in Picton. 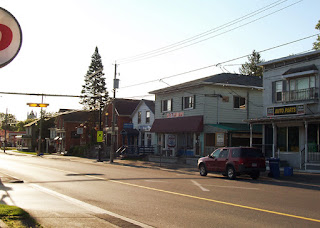 I don't think anyone calls it that, but the pic above is part of the west end of Picton with the centre being the stupid 5-way intersection by the Tim Hortons, I guess. It's hard to tell when Main Street is only about seven blocks long. This is also where I set up today (in front of the Metro) for my 33 on 33 project, but the subject of my painting was the reverse angle with the intersection at Lake Street in view. Here's my Map of Progress (Picton's gonna have a lot of overlapping dots) 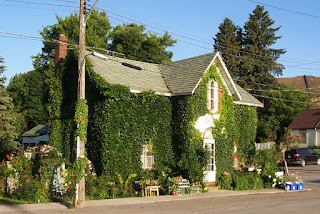 Cute, but too leafy.


I almost painted this quaint little thing, but all that ivy was too much for me to wrap my brain around so I did a street scene instead. 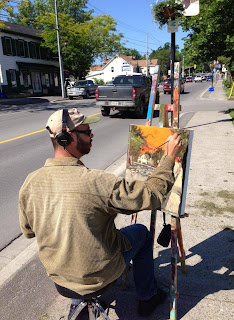 Where I am now.
(photo by Judith Burfoot)