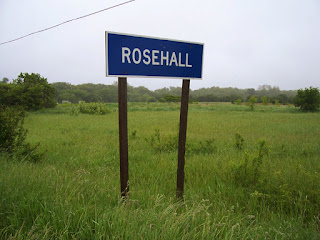 For today's 33 on 33 stop I parked near the village limits sign for Rosehall, but the view was too similar to yesterday's painting (here's my Map of Progress), so I ventured through town, saw a few interesting subjects, but settled at the other village limits sign... 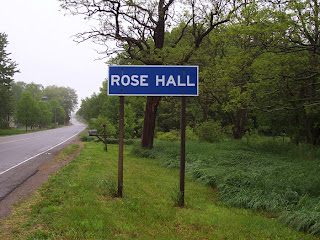 
...which didn't agree with the first sign. Also, if it was an available space consideration, I'd expect them to be reversed, with the two-word version being on the wider sign and vice versa.

I'm sure there's a story behind this, but my (admittedly cursory) online research only yields information on Rosehall Run Vineyards (which is just off Greer Road, my original, loosely-plotted stop for today) and a house in Jamaica which is haunted by the White Witch of Rose Hall, neither one really helping me with proper nomenclature*.

Once again, it was raining, so I painted inside the van. The lighting is very interesting when it's overcast and rainy, and the foliage is extra lush; my colour and form experiments continue...

*I'm kidding, of course; the one-word version is the predominant usage.