When the ship runs out of ocean
And the vessel runs aground
Land's where we know the boat is found
Now there's nothing unexpected
About the water giving out
"Land's" not a word we have to shout
–TMBG, "Women & Men"

The Picton Harbour was an easy choice of subject as I continued to make my way east along Highway 33 and was my last stop in Picton (here's my Map of Progress).

This stop was the shortest distance from my home –about 3.5km away– and was two days after the longest day of the year. This coincidence was something I realized only about a week into my 33 on 33 project, which is too bad, since I would have scheduled my shortest trip to take place on the longest day, had I been aware. 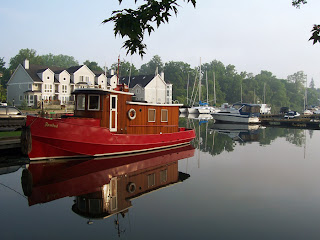 I've passed the Picton Harbour almost every day since moving here and had always wanted but never managed to go down there and take some photos to make some paintings one day. Most interesting thing there besides the glassy water is Rosebud, the tugboat, standing out all bright red against the monochromatic backdrop. Today I managed to finally paint her. 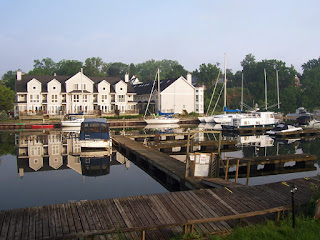 The surface of the water stayed quite glassy for the duration of my painting, giving me amazingly clear mirror-like reflections. 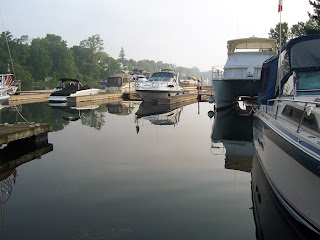 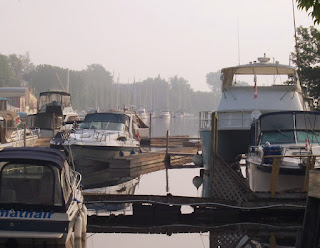 When I got up at 5am Small Pond was enveloped in such a dense fog I could barely see 15m, but by the time I arrived at the harbour it was just a bit hazy as the sun began burning off the mist. 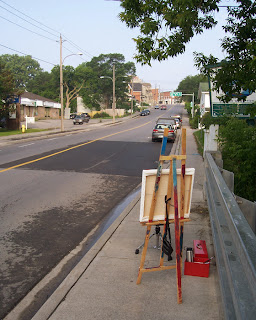 
This is the notorious "Town Hill" where there is a three-way intersection at the top, making for a more annoying traffic arrangement than even the stupid five-way by the Tim Hortons down the road.

The reason it's annoying is that the two streams of traffic at the top have to yield to the uphill traffic (whether they're turning left onto Main Street or turning right onto Highway 49). Most new/transitory people don't realize that uphill traffic has right-of-way (this is especially important in winter to avoid vehicles sliding backwards on icy roads waiting for their turn) and the yield signs are either ignored, aren't descriptive enough, or people just get confused by the annoying arrangement of it all.

As annoying as it is, I find it a bit more annoying to hear people complain about drivers not magically knowing how to navigate The Hill upon first encounter as though this kind of arrangement is commonplace. 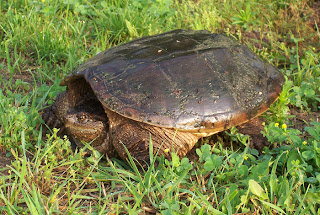 While looking around for a suitable vantage point to paint today I encountered this amazing snapping turtle (roughly half a metre in length) just hanging out on a grassy hill just up from the boardwalk. It's possible it was a female laying eggs (I saw a patch where it looked like it was scratched away, possibly for this purpose)...but it could have just been basking in the morning sunshine. Either way, it was a beautiful creature and I was happy to make its brief acquaintance.