This was my final day of painting en plein air for my 33 on 33 project (here's my final and comprehensive Map of Stops) and I was at the Glenora Ferry, the easternmost end of Highway 33 in Prince Edward County. The ferry takes you across the Adolphus Reach to Adolphustown, where Hwy 33/Loyalist Parkway continues on to Kingston. 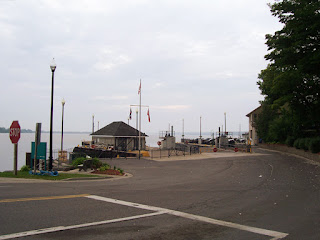 View from the queue.

I've taken this ferry many, many times and it's my favourite way to get to Kingston because I get to ride the tasty ferry and the rest of the drive is gloriously scenic, being alongside the water.

The Murray Canal, The Regent Theatre, and the Glenora Ferry were the only pre-determined stops for this project, all others being decided as I went along, so I knew this would conclude my journey and I had to make it count. The forecast was for rain (yet again!) but the weather actually got better over the course of my painting until the sky was clear by the end.

I didn't know if I'd be a fast enough painter to be able to include the ferry in my painting today because of its very brief stay at the dock, but I sketched it in and kept adding more detail each time it arrived, to the point where I was able to get quite a good likeness of it and I'm very happy with the final painting.

Stop here for Ferry.
But...
Don't stop the dance. 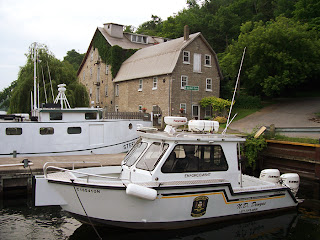 The mill and the enforcer.

Built in 1806 by Peter Van Alstine, the Glenora Mill was often the first view of Prince Edward County for early settlers. There is currently an excellent port produced by Karlo Estates that's named for Van Alstine.

Going "behind the scenes" to take some pictures I managed to get all of the old Mill in the shot, but I couldn't get back far enough to get all of the Ministry of Natural Resources building in one shot. I did get it in another way, though (further down below). 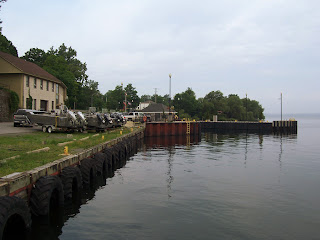 Thankfully, I didn't even have to sneak around to take the above two shots thanks to the helpful MTO folks who let me explore the area a bit. 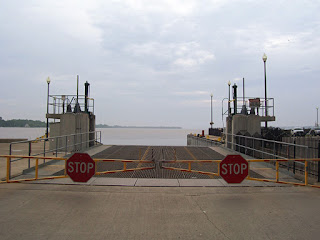 Back in the 1980s, when music videos were more of a thing than they are now, Niagara Falls band Honeymoon Suite shot their video for "Wave Babies" on a beach at Sandbanks, and the intro features an older Glenora Ferry (IRL continuity error: when they're "headin'dulla beach" they're actually boarding the boat on the Glenora side, therefore leaving PEC). 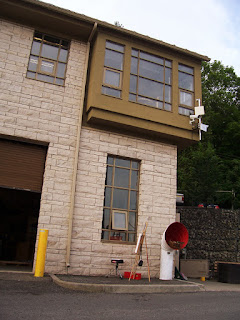 Again aided and abetted by the incredibly friendly folks working at the ferry for the MTO (thanks, Jim!) I scored this great spot out of everyone's way and with a better vantage point of the dock and the ferry than I could have achieved on my own. 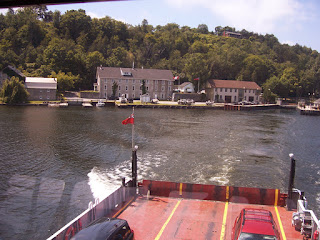 Sure, I could have gotten this shot of (from left to right) the Glenora Mill, The Ministry of Natural Resources, the Ministry of Fisheries/MTO buildings, and the Glenora dock from the vehicle deck, but I was invited up to the wheelhouse –and offer that was impossible to refuse. 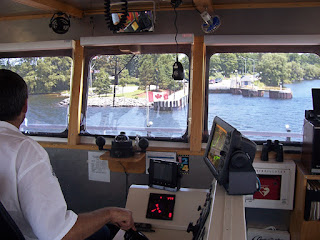 Captain Norm at the helm.

I have to admit, with each step I climbed up to the wheelhouse I felt myself getting younger and younger, becoming as giddy as a schoolboy, but I maintained my composure and remained cool; not everybody gets to go up there. 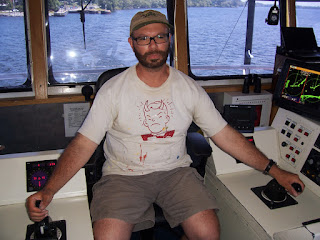 Me at the helm.

Just after we cleared the Adolphustown dock, the captain said to me, "Well, you painted her, you might as well drive her." A few seconds later, when I realized I didn't just imagine him saying that, I took the centre seat and actually drove the ferry for a few minutes. No, I didn't dock it back at Glenora. 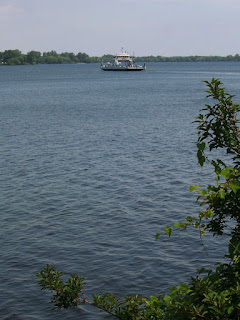 
This was a great day of painting and a more-than-satisfying conclusion to my journey across the beautiful and historically rich County of Prince Edward.