Look past the volleyball
Look past the squawking gull
Ignore the mountain of discarded falderal
–TMBG, "Metal Detector"

I finally arrived in Wellington today.
Since the early planning stages of 33 on 33 I knew that I'd like to spend at least three days in each of the bigger towns as I head east (Wellington, Bloomfield, and Picton, respectively), and I was looking forward to these stops largely because they would offer different views than most of Highway 33, which runs along farmland (which is interesting, too, just different).

Also, up until now, I was painting down a road that had two official names, Highway 33 and Loyalist Parkway, but as it cuts through each of the three towns mentioned above, a third official name comes in to play: Main Street. 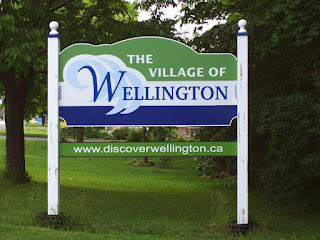 This is the largest community I've been to yet for this project, having a population of about 1,700 people. Wellington was once called Smokeville after a local First Nations elder, but was renamed after a white guy in the 1860s. However, my research has turned up another account claiming that Smokeville was named after a white guy as well: Daniel Reynolds, one of Prince Edward County's earliest residents, was nicknamed "Old Smoke." 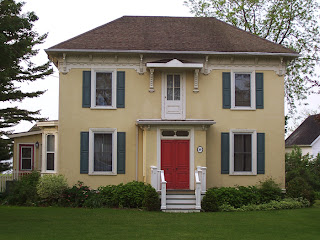 The house above was a serious contender for my painting today, but I chose to paint the one next door to it because, from my vantage point, it was partially obscured by a tree and I found this much more interesting. 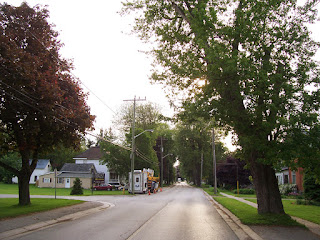 My parking spot is just out of sight to the left of that photo. That intersection is at Cleminson Street (here's my Map of Progress). 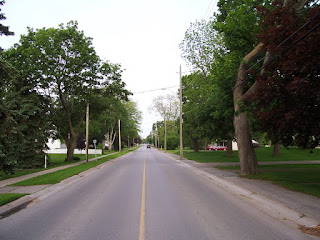 Wellington has some awesome tall trees lining the street as you head into town from the west. 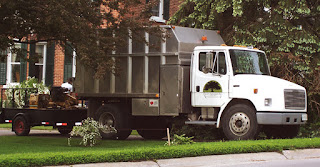 
So the house I painted today was chosen because I liked the way it was partially obscured by its neighbour's tree, but of all the houses in Wellington I could have chosen to paint, and of all the angles I could have chosen to paint it, I picked the one that would be unexpectedly obscured by this truck for about an hour. Not only was it in my way, but it was delivering landscaping items (trees, plants, etc.) that ended up lining the driveway, changing what I had initially drawn. Luckily, I arrived quite early and I blocked out the painting quite quickly, so I was able to work around these obstacles.