Is he a dot, or is he a speck?
When he's underwater does he get wet?
Or does the water get him instead?
Nobody knows, Particle man
–TMBG, "Particle Man"

My 33 on 33 project has had me nearly equally painting en plein air and in-the-van, a little bit to my frustration, but I also kind of like camping out in my blue box like some kind of vagabond. 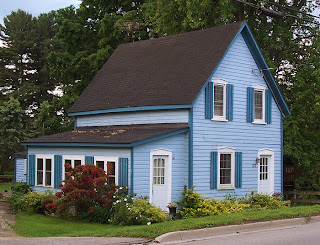 
I almost painted this charming little blue house, but I couldn't get a good view from inside the car in case it rained. Instead, I went back into town and decided to paint a portion of the Saylor Block (seen in the black and white image from Day 23). This had me parked across the street from my location yesterday, and if you were able to zoom out of my photo a bit (and shift time forward a day) you'd see me painting in the van. Basically, I didn't continue moving eastward since yesterday –but I'll try to keep this as an exception and, rest assured, two very different paintings were done. You can see the doubled-up stops on my Map of Progress. 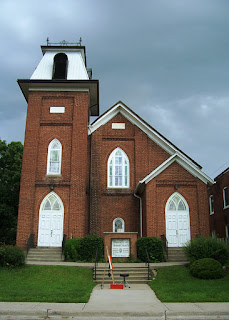 Gambling against those clouds.

I knew rain was forecast but it only looked foreboding, so I set up in front of Bloomfield United and started painting the Saylor Block across the street. About two hours later it started to rain tiny sprinkly drops that I thought would soon pass so I stayed outside, getting a few drops on my palette and in-progress canvas. About ten minutes later, the rain became more insistent and I had to move into the van for the next few hours. I like the painting, though.